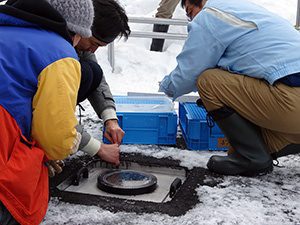 Demonstration tests on snow and ice monitoring sensors, led by the Japan Aerospace Exploration Agency (JAXA), have begun at Kitami Institute of Technology (Kitami, Hokkaido). For the tests, researchers have created outdoor, underground installations of the sensors to demonstrate the technology’s ability to detect the thickness and quality of snow that accumulates on the glass covering the sensors.

By illuminating snow or ice with laser light, the sensors measure the accumulation, density and other characteristics of the target substances. Observations from the sensors will enable airports to predict runway slipperiness, notify pilots accordingly, and implement snow-removal measures at the optimal times by detecting snow accumulation thickness.

After conducting tests through the end of FY2017, JAXA is planning to start installing snow and ice monitoring sensors under road surfaces in Hokkaido after FY2018. Researchers then will begin demonstration testing on road installations to evaluate sensor operations.