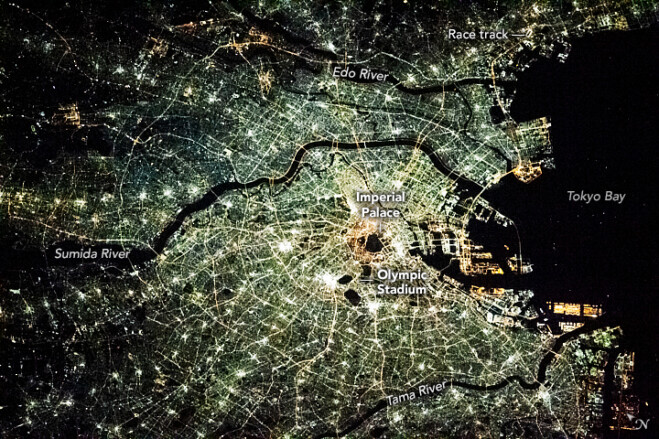 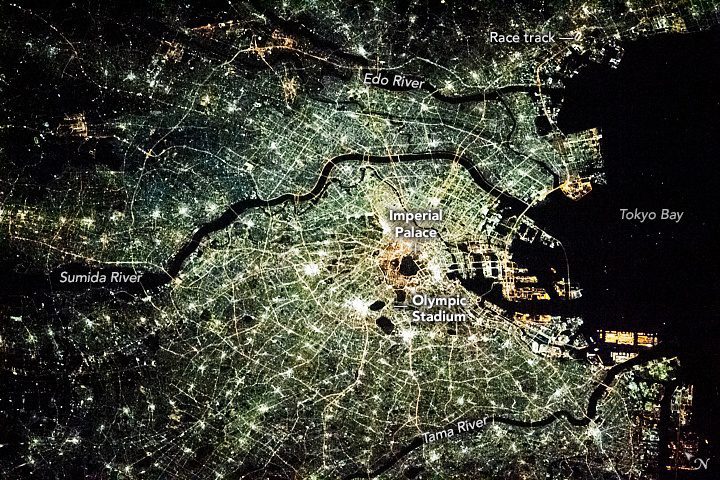 Months before the world turned its eye toward Tokyo for the 2020 Summer Olympics, an astronaut on the International Space Station captured this image of the Japanese megacity. The photograph offers a distinctive, high-resolution view of the city’s structure via its nighttime light.

Many cities are oriented around a center. In most modern cities, this is a bright downtown. In Tokyo, it’s the Imperial Palace. Strings of light emanate from the palace and follow Tokyo’s major expressway system outward. The brightest points indicate clusters of large buildings in several downtown areas. Major sports venues—like the Olympic Stadium and horse racing tracks—also leave subtle marks on the Tokyo nightscape.

In a city so well illuminated, the dark areas stand out as much as the bright. As Tokyo’s population pushes past 40 million, the city is reaching geographic limits on outward growth. Naturally bounded by Tokyo Bay to the east and mountains to the west, darker areas farther from the city center are often designated parks. The park system of Tokyo is extensive, covering 36 percent of the total land area in the prefecture.

The other negative space in the photo is Tokyo Bay and the major rivers (the Sumida, Tama and Edo) that run through the city and into the bay. The only interruption to the darkness of the bay is the small points of light caused by ships traveling to and from Tokyo’s busy docks. The sharp, angular nature of the docks contrasts with the winding of the rivers and highlights their human-made origin.