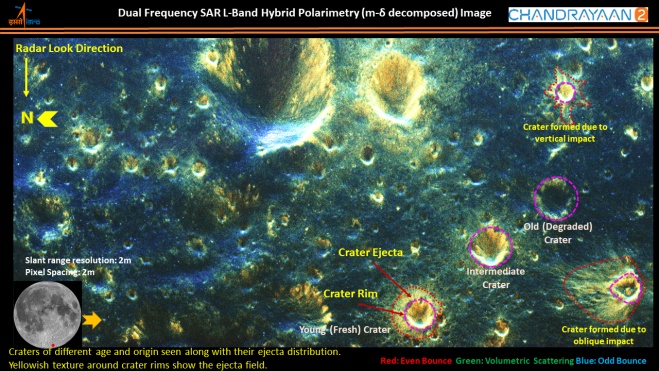 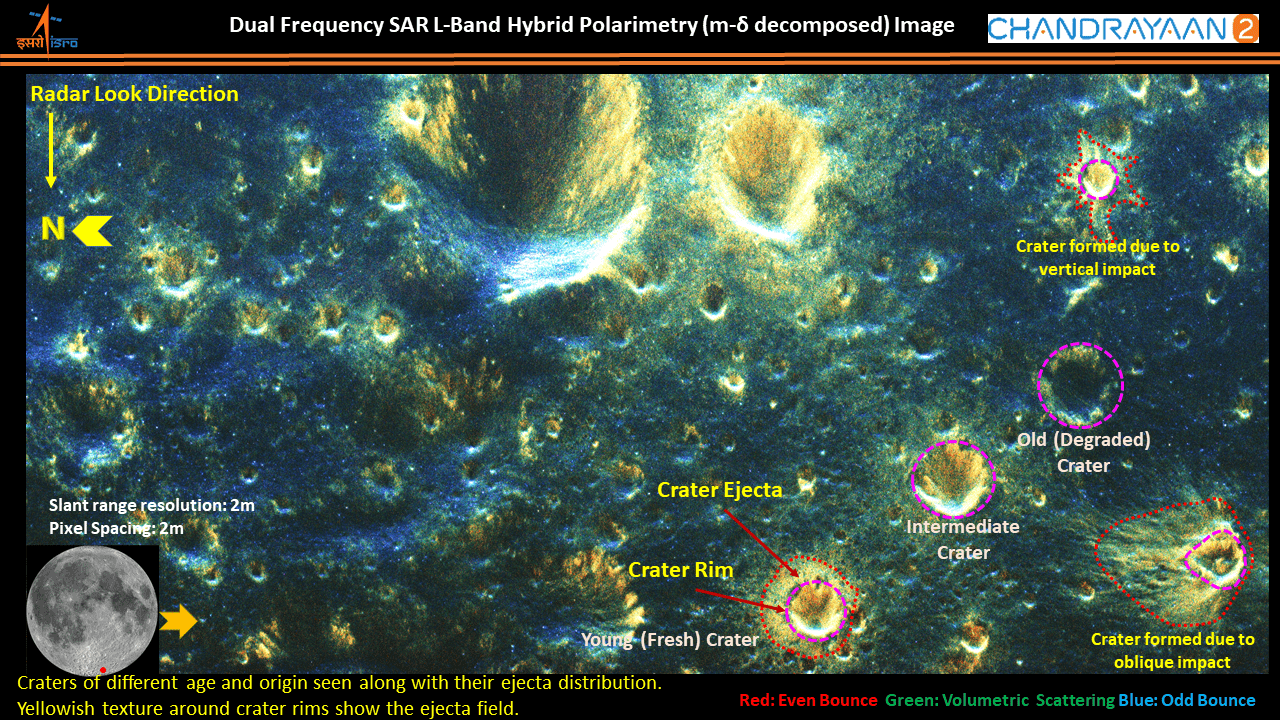 According to information obtained from the Indian Space Research Organisation (ISRO) Chandrayaan-2 Dual-Frequency Synthetic Aperture Radar (DF-SAR) satellite, the moon has been continuously bombarded by meteorites, asteroids and comets since its formation. This has resulted in the formation of innumerable impact craters that form the most distinct geographic features on its surface.

Previous lunar-orbiting SAR systems—such as the S-band hybrid-polarimetric SAR on ISRO’s Chandrayaan-1 and the S & X-band hybrid-polarimetric SAR on NASA’s LRO—provided valuable data on the scattering characterization of ejecta materials of lunar impact craters. However, the L & S band SAR on Chandraayan-2 is designed to produce greater details about the morphology and ejecta materials of impact craters due to its ability of imaging with higher resolution (2 – 75-meter slant range) and full-polarimetric modes in standalone as well as joint modes in S and L-band with a wide range of incidence angle coverage (9.5° – 35°). In addition, the greater depth of penetration of L-band (3-5 meters) enables probing the buried terrain at greater depths. The L & S band SAR payload helps in unambiguously identifying and quantitatively estimating the lunar polar water-ice in permanently shadowed regions.

The accompanying figure is one of the first datasets acquired over lunar south polar regions in L-band high-resolution (2-meter slant-range resolution) hybrid polarimetric mode. This image presents many interesting facts about the secondary craters of different ages and origins in the lunar south polar region. The yellowish tone around crater rims in the image shows ejecta fields. The distribution of ejecta fields, whether uniformly distributed in all directions or oriented toward a particular side of a crater, indicates the nature of the impact. The image shows craters of vertical impact and oblique impact on the top-right and bottom-right, respectively. Similarly, the roughness of the ejecta materials associated with the impact craters indicates the degree of weathering a crater has undergone. Three similar-sized craters along a row on the bottom-right of the image show examples of young crater, moderately weathered crater and an old degraded crater. Many of the ejecta fields seen in the image are not visible in high-resolution optical images over the same region, indicating the ejecta fields are buried beneath regolith layers.