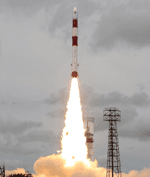 The Megha-Tropiques was launched in a low Earth orbit between 25 degrees North and 25 degrees South latitude at an altitude of 865 kilometers, inclined 20 percent relative to the equator. This vantage point will keep the satellite above the tropical belt to study humidity profiles, cyclones and flooding in the tropical zone. The orbit also keeps the satellite from flying over the French mainland, which is perhaps a first for a mission-funding country.

There are four instruments aboard the satellite:

Funding for the operation was split between ISRO (60% or Rs 90 crore) and CNES (40%), with an approximately total $98 million budget. This observation mission is just the second to to look at tropical climate globally, following on the NASA and Jpan joint mission of 1997. The mission is expected to last from three to five years time.

The three micro satellites that were launched alongside Megha-Tropiques include:

You can watch a launch video here.