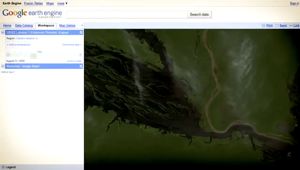 The tools were made available to rainforest nations in advance of this week’s climate talks as both a means of assessing carbon in their forests and as a testbed for system development. Earth Engine is not only a core platform for hosting imagery and other geospatial data, it is also an analysis processing framework with an Earth Engine API for scientists to write their own code to customize the platform for their area of interest. Google is also providing 20 million CPU hours for free to scientists and developing countries to take advantage of the new analytical tool.

Earth Engine has been a collaborative effort that has included contributions from Greg Asner of the Carnegie Institution for Science, Carlos Souza of Imazon and Matt Hansen of the Geographic Information Science Center at South Dakota State University.

It is hoped that this year’s talks will result in an agreement on the U.N. initiative known as Reducing Emissions from Deforestation and Forest Degradation in Developing Countries (REDD), and this tool will act as a means to monitor and enforce such an agreement, tracking environmental change and deforestation rates in real time.