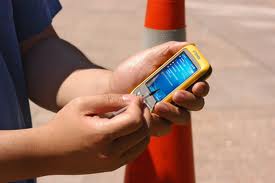 Shanghai Greening and City Appearance Administration has initialized the digital greening project, which aims to transform Shanghai through increased planting and better management of vegetation and trees on public land. In fact, the World Expo theme of “Better City – Better Life” complemented the digital greening project precisely. To accomplish the goals of the project, the administration completed three separate projects, each with different aims and requirements.

The first project, completed in 2007, was to map all of the existing trees located on public land so the administration could establish a benchmark for the “greenness” of the City of Shanghai. The next step was to analyse the results and formulate plans based on the data. Nine million trees were digitalized from aerial photographs over 2,600 square kilometers (1,600 square miles). The administration used 40 GeoXT handhelds to check and update the location and attributes of these trees. Using Trimble equipment the project was completed in 2009, several months ahead of schedule.

Completion of the project resulted in an accurate, up-to-date geodatabase that can be used for daily planning and management of operations. Because keeping the geodatabase up to date is so important, each month a dedicated team reviews aerial photographs to locate areas where new trees have been planted or existing trees have been removed; changes are recorded in the database.

Once all of the existing trees in Shanghai were mapped, the administration began a second project. This initiative involved recording the current health of sample sets of trees. To support this ongoing effort, the team uses Juno SC handhelds running a custom Windows Mobile® field application. Approximately 150 field workers are deployed to regularly inspect the trees in Shanghai and with a built-in wireless connection the Juno SC handheld is an essential tool in timely data capture.

In addition, when a group of trees needing treatment for pests or disease is identified, jobs are dispatched wirelessly to workers who can treat the trees in a timely manner. Previously, pests and disease issues were recorded using pen and paper, and then the data faxed to the office. It was difficult to gather statistics or to analyze the data and as a result there were delays in treating trees. Because the data is now sent immediately to the office, trees are protected from pests and disease in time and audit information is always up-to-date.

The third project is also ongoing and supports the wildlife monitoring efforts of the administration. Juno SC handhelds are used to record the wildlife activities and behaviours of birds in coastal areas and large parks around Shanghai. Around 20 highly trained field workers visit these locations on a set schedule to collect information about the number of birds in the area. In the same way as with the tree pests and disease project, GPS positions are sent to the office every five minutes for online tracking. The custom office application, developed by the administration, shows the location of each field worker and is used to send and receive jobs, and add the field data to an Esri ArcGIS geodatabase.

If the wildlife numbers are alarming in some way, such as there are a large numbers of dead birds recorded at any one location, the application automatically generates an alert for the office supervisor. The supervisor can then forward the alert to the appropriate authorities for investigation. An outbreak of illness can be serious—timely data is imperative for managing bird flu cases and minimizing the risk of transmission to humans. “Trying to manage this data with pen and paper was never an option” says Qian Jie, Director of the Shanghai Landscape Administration Information Center. “We just wouldn’t have had the data fast enough or regularly enough and so it would have been pointless trying to do this without an electronic solution.”