IIC Academy, the learning arm of IIC Technologies with campuses in Hyderabad and Visakhapatnam, will collaborate with Andhra University to offer industry-focused courses in surveying, GIS and cartography. 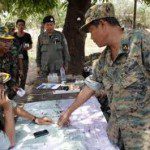 After conflict between Thailand and Cambodia at the Chong Am Border Crossing, the two countries have formed a joint committee to begin surveying the contested watershed. Thailand suggests the area be declared a no-mans land.

HUNTSVILLE, Ala., Jan. 13, 2015- The National School of Surveying, University of Otago implemented Hexagon Geospatial technologies provided by Intergraph in their quest to measure the summit of Mount Cook, the tallest mountain in New Zealand and a...

West Kelowna, BC, Canada, Dec. 15, 2014—MicroSurvey is pleased to announce the release of MicroSurvey CAD 2015, a major update to its flagship desktop survey and design program for land surveyors and civil engineers.