New from Carlson Software and Carlson EMEA is Carlson GIS360 for Android, an easy-to-learn and -use mobile field GIS-GPS tool that utilizes both GIS and surveying technologies for field data collection.

EDINBURGH, Scotland, Oct. 1, 2014—Routescene is to launch a new turnkey 3D mobile mapping solution, the Routescene LidarPod, at Intergeo which will save time, achieve more detailed and faster results and address many of the challenges currently...

Topcon Positioning Group announces the completion of the stakeout step in the making of the “facescape” project on the National Mall with Topcon technology, personnel and equipment. 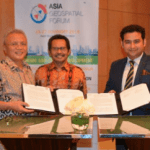 Mine camp builder OTOC has taken the first step towards expanding its surveying business nationally by buying a Victorian firm for up to $17 million. OTOC has made a deal to acquire Bosco Jonson, a Melbourne-based surveying,...