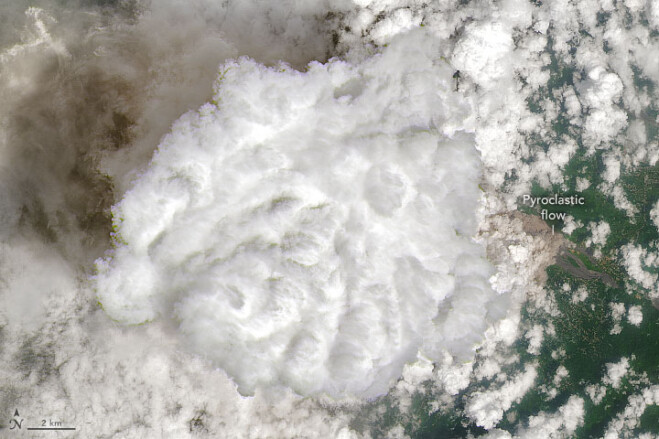 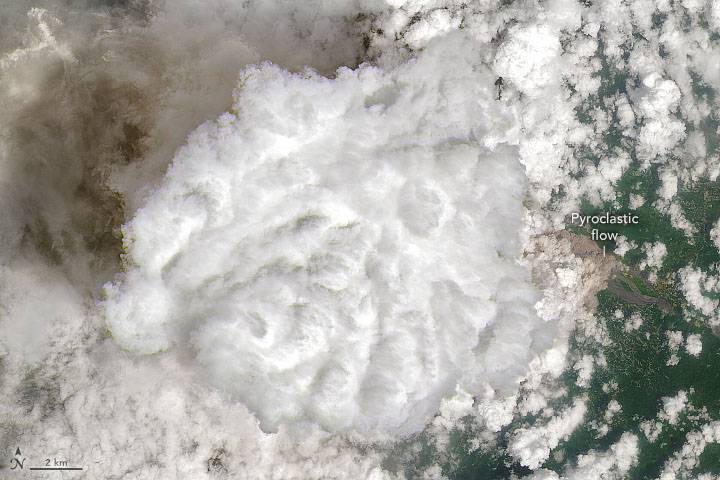 One year after Indonesia’s Mount Semeru unleashed a destructive eruption, the tallest and most active volcano on Java erupted again in early December 2022. Late on Dec. 3, 2022, a series of explosions from the summit crater expelled gas and ash that rose as high as 6,100 meters (20,000 feet) at times, according to the Darwin Volcanic Ash Advisory Center. Intense activity continued through the night into the next day.

The Operational Land Imager-2 (OLI-2) on Landsat 9 captured this natural-color image of a volcanic plume streaming from Semeru on Dec. 4, 2022. Volcanic plumes typically consist of ash and a mixture of volcanic gasses, including water vapor, carbon dioxide, sulfur dioxide, hydrogen sulfide and hydrogen halides. In this case, a towering convective cloud, perhaps drawing energy from the heat of the eruption, obscured parts of the plume. Diffuse ash slightly darkens the large cloud’s shadow (directly to its west) and the underlying landscape farther to the west in this wider version of the image.

Below and to the east of the large convective cloud is what appears to be the edge of a pyroclastic flow moving down a river channel on the mountain’s southeastern flank. These billowing avalanches of superheated ash, tephra, soil and other debris race at high speeds and can destroy most things in their path. The December eruption produced several of these flows, including one that reached a length of 19 kilometers (12 miles), according to the Indonesian National Board for Disaster Management (BNPM).

The eruption has forced nearly 2,000 people from their homes. On Dec. 4, 2022, the Center for Volcanology and Geological Hazard Mitigation (PVMBG) raised the status of the eruption from 3 (“siaga,” or “alert”) to 4 (“awas,” or “caution”), the highest on the 1-4 scale. The PVMBG urged people to stay at least 5 kilometers (3 miles) away from the summit and at least 500 meters (1,600 feet) from the Besuk Kobokan river channel.