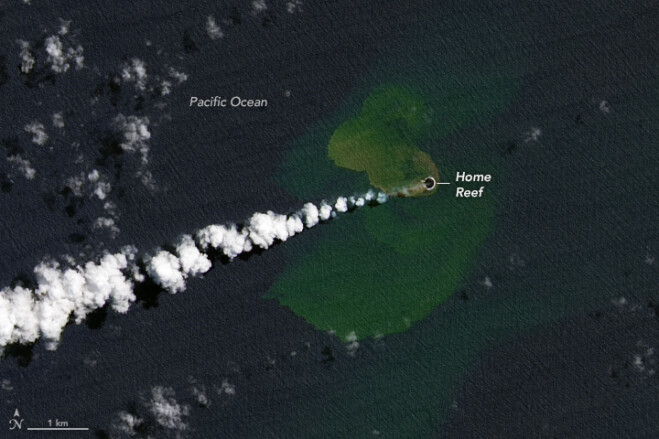 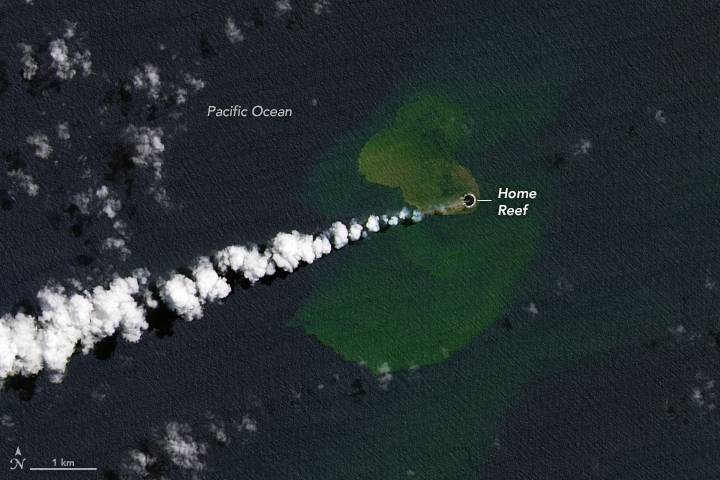 In the southwest Pacific Ocean, a seafloor ridge that stretches from New Zealand to Tonga has the highest density of underwater volcanoes in the world. On Sept. 10, 2022, one of them awoke. In the days since, the Home Reef seamount in the Central Tonga Islands has repeatedly oozed lava, ejected plumes of steam and ash, and discolored the surrounding water.

Eleven hours after the eruption began, a new island rose above the water surface. The Operational Land Imager-2 (OLI-2) on Landsat 9 captured this natural-color view of the young island on Sept. 14, 2022, as plumes of discolored water circulated nearby. Previous research suggests that these plumes of superheated, acidic seawater contain particulate matter, volcanic rock fragments and sulfur.

On Sept. 14, researchers with Tonga Geological Services estimated the area of the island to be 4,000 square meters (1 acre) and the elevation to be 10 meters (33 feet) above sea level. By Sept. 20, the island had grown to cover 24,000 square meters (6 acres). The new island is located southwest of Late Island, northeast of Hunga Tonga-Hunga Ha‘apai, and northwest of Mo‘unga‘one.

Home Reef sits within the Tonga-Kermadec subduction zone, an area where three tectonic plates are colliding at the fastest converging boundary in the world. The Pacific Plate here is sinking beneath two other small plates, yielding one of Earth’s deepest trenches and most active volcanic arcs.