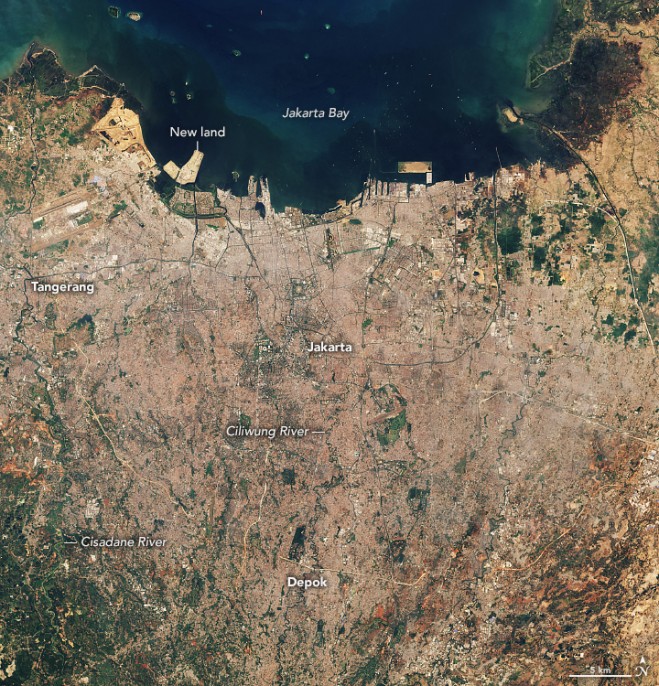 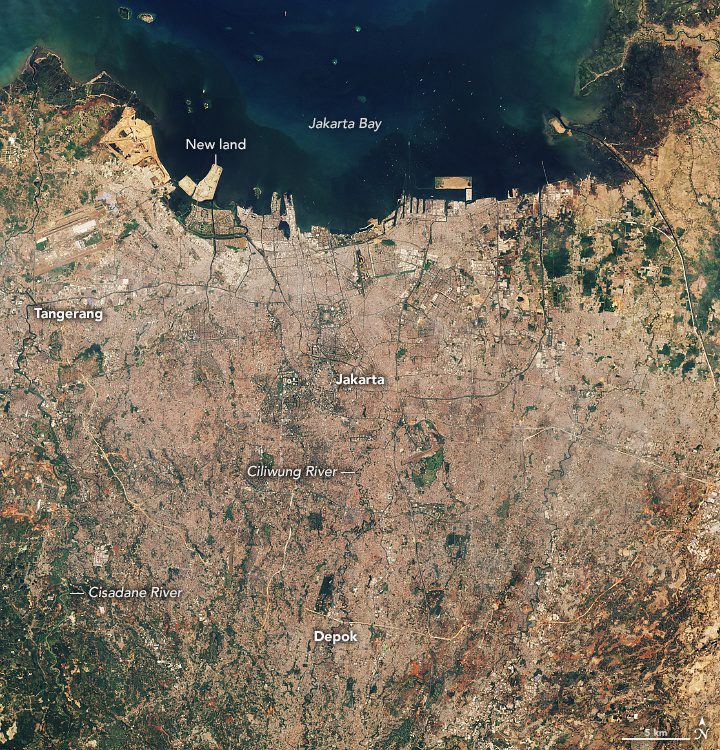 With global temperatures rising and ice sheets melting, plenty of coastal cities face a growing risk of flooding due to sea level rise. Few places, however, face challenges like those in front of the Jakarta metropolitan area, a conglomeration of 32 million people on the Indonesian island of Java.

Since the city’s early days, flooding has been a problem because Jakarta is situated along several low-lying rivers that swell during the monsoon season. In recent decades, the flooding problems have grown even worse, driven partly by widespread pumping of groundwater that has caused the land to sink, or subside, at rapid rates. By some estimates, as much as 40 percent of the city now sits below sea level.

With mean global sea levels rising by 3.3 millimeters per year, and amid signs that rainstorms are getting more intense as the atmosphere heats up, damaging floods have become commonplace. Since 1990, major floods have happened every few years in Jakarta, with tens of thousands of people often displaced. The monsoon in 2007 brought especially damaging floods, with more than 70 percent of the city submerged.

Rapid urbanization, land-use change and population growth have exacerbated the problem. These Landsat images show the evolution of the city during the past three decades. The widespread replacement of forests and other vegetation with impervious surfaces in inland areas along the Ciliwung and Cisadane rivers has reduced how much water the landscape can absorb, contributing to runoff and flash floods. With the population of the metropolitan area more than doubling between 1990 and 2020, more people have crowded into high-risk floodplains. Also, many river channels and canals have narrowed or become periodically clogged with sediment and trash, making them especially prone to overflowing. 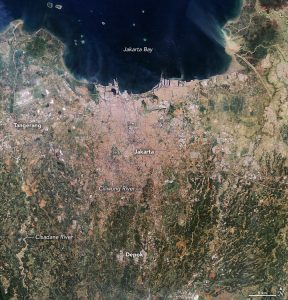 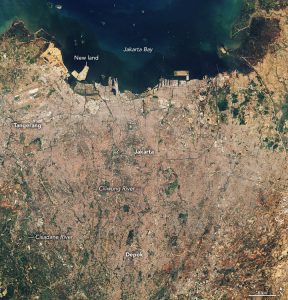 Since the first image (right) was captured in 1990, artificial land and new development has spread into the shallow waters of Jakarta Bay. According to one analysis of Landsat data, people have built at least 1,185 hectares (5 square miles) of new land along the coast. Much of the land has been used for high-end residential developments and a golf course, explained Dhritiraj Sengupta, a remote sensing scientist at East China Normal University. Such developments come with risks because they sit at the front lines of Jakarta’s inevitable battle against sea-level rise and storm surges, cautioned Sengupta.

Some of the new islands were built as part of Jakarta’s National Capital Integrated Coastal Development master plan—an effort to protect the city from flooding and to foster economic development. A key initiative was the construction of a giant seawall and 17 new artificial islands around Jakarta Bay. Though work on the project began in 2015, a range of environmental, economic, and technical concerns have slowed construction and reduced the scope.

The plan to construct a huge seawall is still in place, but it may not be enough to preserve the status quo in Jakarta. With environmental pressures mounting, Indonesian politicians hope to move the seat of government from Jakarta to a new location on the island of Borneo.