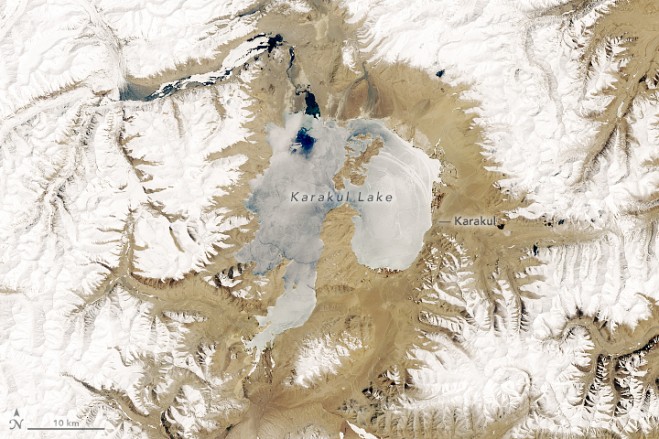 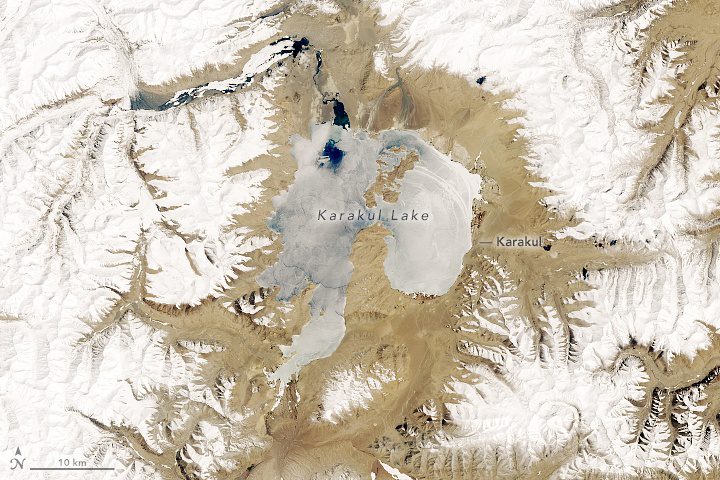 Karakul in many Turkish languages means “black lake.” That description of Karakul Lake, located high in the eastern Pamir Mountains in Tajikistan, is accurate for some of the year. But during the region’s frigid winter, the dark surface is exchanged for a layer of bright white.

The seasonal snow and ice cover had not yet melted by May 1, 2019, when the Operational Land Imager (OLI) on Landsat 8 acquired these images. Areas of open water are starting to appear as the air temperatures in May start to climb to around 13.8 degrees C (57 degrees F)—far warmer than the average January temperature of 5 degrees F.

Meltwater from this snow and ice is an important source of freshwater for the high-mountain lake, which receives very little rainfall—less than 3 centimeters per year. Without any rivers draining the lake, water loss occurs primarily through evaporation. As a result, the lake is saltier than ocean water, or “hypersaline.”

The salty and dense water is so buoyant that boats easily tip over. But the extreme environment does not stop people from attempting to row, kite-surf, and kayak during an annual summer regatta. People can reach the lake via the Pamir Highway. A section of the rugged road runs along the lake’s eastern side at a remarkably high elevation of 3,900 meters (13,000 feet) and passes the small lakeside village of Karakul.

The lake partially fills a large basin that is about 50 kilometers across, which some scientists think originated from a meteor impact more than 20 million years ago. The basin and much of the Pamir mountain range fall within Tajik National Park, which in 2013 was named a UNESCO World Heritage Site.