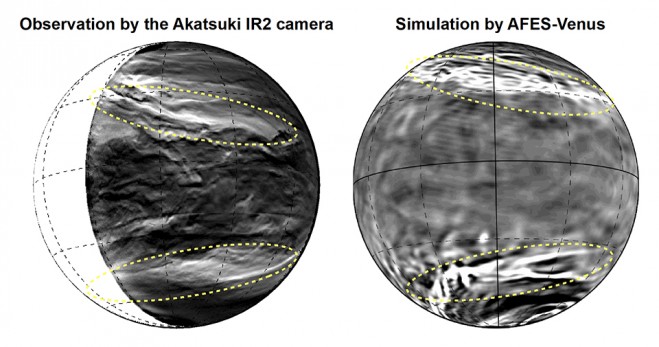 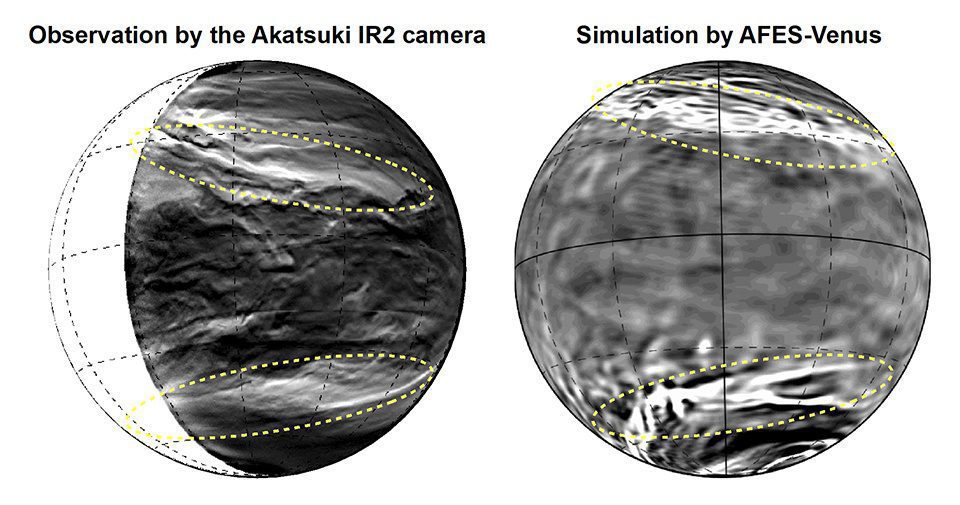 A Japanese research group identified a giant streak structure among the clouds covering planet Venus based on observation from the spacecraft Akatsuki. The team also revealed the origins of this structure using large-scale climate simulations. The group was led by Project Assistant Professor Hiroki Kashimura (Kobe University, Graduate School of Science) and these findings were published on Jan. 9, 2019, in Nature Communications.

Venus is often called Earth’s twin because of their similar size and gravity, but the climate on Venus is very different. Venus rotates in the opposite direction to Earth and a lot more slowly (about one rotation for 243 Earth days). Meanwhile, about 60 kilometers above Venus’ surface a speedy east wind circles the planet in about four Earth days (at 360 km/h), a phenomenon known as atmospheric superrotation.

The sky of Venus is fully covered by thick clouds of sulfuric acid that are located at a height of 45-70 kilometers, making it hard to observe the planet’s surface from Earth-based telescopes and orbiters circling Venus. Surface temperatures reach a scorching 460 degrees Celsius, a harsh environment for any observations by entry probes. Due to these conditions, there are still many unknowns regarding Venus’ atmospheric phenomena. 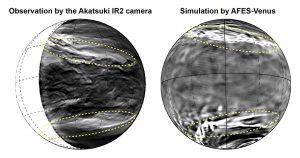 The lower clouds of Venus (left) observed with the Akatsuki IR2 camera (after edge-emphasis process). The bright parts show where the cloud cover is thin. You can see the planetary-scale streak structure within the yellow dotted lines. The planetary-scale streak structure was reconstructed by AFES-Venus simulations (right). The bright parts show a strong downflow. (Partial editing of image in the Nature Communications paper. CC BY 4.0 https://creativecommons.org/licenses/by/4.0/）

To solve the puzzle of Venus’ atmosphere, the Japanese spacecraft Akatsuki began its orbit of Venus in December 2015. One of the observational instruments of Akatsuki is an infrared camera “IR2” that measures wavelengths of 2 μm (0.002 mm). This camera can capture detailed cloud morphology of the lower cloud levels, about 50 kilometers from the surface. Optical and ultraviolet rays are blocked by the upper cloud layers, but thanks to infrared technology, dynamic structures of the lower clouds are gradually being revealed.