The West Bengal government will roll out a new computer-based system to track rural activities in the state, an official said Friday. The technology to store and analyse data for specific geographic locations across 1,000 gram panchayats...

After months of clamoring, the MH370 raw satellite data that families have been demanding may soon be publicized. Until now, Inmarsat -- the company whose satellites communicated with the missing plane in its last hours -- has... 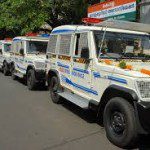 India's central government is working on an integrated location-based emergency response system to improve emergency response in communities. The project has been approved by the Indian Cabinet Committee on Economic Affairs after receiving a proposal from the...

Prima Research LLC announced today that it has been granted two patents from the U.S. Patent and Trademark Office for technology related to the burgeoning location services (LS) business sector. The patents are for an...

It sounds like something out of a James Bond movie - GPS bullets that can track the location of a suspect's car. The bullet is designed to make high-speed chases safer - enabling the authorities to track...

ESA’s versatile water mission tracked Asia’s recent storms over land and sea. Over the past three weeks, tropical cyclone activity has intensified over the seas bordering southern and eastern Asia.

Blue Sky Network, a principal supplier of satellite tracking and communication solutions for aviation, land and marine, today announced the launch of the HawkEye 7200 portable M2M tracking solution. The HawkEye 7200 includes features such as multi-national...