SAN FRANCISCO —  Mapbox, the leading real-time location and mapping platform for developers, today announced Roy Ng ( photo) has been appointed President and Chief Operating Officer (COO). As President and COO, Ng will have responsibility for... 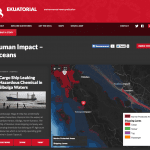 GeoJournalism Takes Off in Asia with Launch of Ekuatorial Site

Journalists continue to embrace mapping and online technologeis to report local news to a global audience within context. The Ekuatorial site launches in Indonesia as a partnership with the Society of Indonesian Environmental Journalists.

Over a four-week period earlier this year, we invited about 30 cyclists, researchers, cartographers and geospatial specialists to come into our offices at Media House in Melbourne for a very special experiment: a hackathon that lasted four...