The US space agency Nasa has reported that India’s earth observation satellite Risat-1 had experienced a “fragmentation event” in September last year, when pieces appeared to have broken off. Read More at Deccan Chronicle

Having been unable to keep pace with satellite fabrication, the ISRO has now roped in the private industry to bridge the gap. Read More at The Deccan Chronicle

ISRO has been moving towards a more innovative and explorative space future with its onboard deep-space, and inter-planetary missions and its advancements on conducting inter-planetary explorations have been marked with two successful missions like Chandrayan-1 and Mars...

Buried in the flood of congratulatory messages that the Indian Space Research Organisation (ISRO) received after its recent space feat is one discordant note raising some concern. Read More at The News Minute 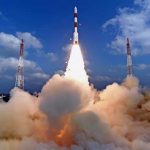 On Feb. 15, 2017, India’s space agency (ISRO) successfully launched a record 104 satellites on a single rocket; this is the highest number of satellites ever launched in a single mission. The Polar Satellite Launch Vehicle PSLV-C37...

Is India beating China in its own game — building a low-price, efficient and increasingly reliable model in the space sector? Read More at Hindustan Times