Based on common web technologies including HTML, CSS and JavaScript, the ARchitect Engine puts the power of Augmented Reality directly in the hands of the developers with multimedia support and advanced interaction possibilities.

View the Full Depths of Your Data with Voxler 3

Ditch the 2D world and power forward into 3D data visualization with Voxler® 3. This newly released product is packed with over 100 enhancements and features as requested by YOU! Blow away the competition with Voxler’s powerful 3D rendering and visualization features. Read More

Mumbai Kerala-based Light Logics Holography & Optics will set up Asia's first holography studio at Kovalam near Trivandrum, a top company official said. "We have already set it up, though a formal inauguration is pending. By February 2012,...

The Océ Colorwave600 is the first large format printer ever to utilise the new and unique Océ CrystalPoint technology and it sets new standards in quality, clarity, reliability, productivity and resilience. It is the brilliant system if...

Autodesk, Inc. announced the release of Autodesk 3ds Max 2012 software, the latest version of the company’s 3D modeling, animation, rendering and compositing application. Mapping to the Excalibur (XBR) initiative — a phased plan for the restructuring... 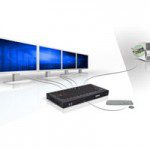