Thailand’s Department of Highway is so impressed with the traffic data, collected by their BlipTrack Wi-Fi / Bluetooth Sensor solution, that they are now expanding the technology to cover additional roads in Bangkok. The city is considered...

China Gets First Data from its ‘Hack-Proof’ Satellite

China today said the first batch of data from the world’s only quantum satellite, which can provide “hack-proof” communications at speeds faster than light, has been received by it. Read More at Financial Express

Data collated by the Oceansat-2 Earth Observation satellite will be transmitted to the Dundee Satellite Receiving Station (DSRS) and distributed to other research centres across the UK. Read More at The Courier

PORTO ALEGRE, Brazil, Dec. 7, 2015 — Endeeper, well-known provider of software and services for knowledge management and data integration of geological data, announced the establishment of a long-term sales representative agreement with Energy Quest of Malaysia, a... 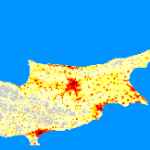 MINNEAPOLIS, Minnesota, Sept. 9, 2015 — East View is pleased to announce our worldwide release of the LandScan 2014 Global Population Database. LandScan is developed by the Oak Ridge National Laboratory for the United States Department of...