Raleigh, NC  – senseFly, the leading provider of fixed-wing drone solutions, has confirmed its position as the United States’ most popular fixed-wing drone provider, according to data provided by the FAA.

According to official FAA Part 107 commercial drone registration data, received by senseFly following an FOIA request with the FAA, senseFly small Unmanned Aerial Systems (sUAS or drones) account for almost half of all new commercial fixed-wing drone registrations, at 45%. The FAA’s figures, spanning the period January to September 2018—the latest data available—showed that last year’s registrations of the senseFly eBee are a full 29% ahead of the next fixed-wing provider on the list.

“These figures confirm senseFly’s professional eBee drone as the universal fixed-wing of choice, trusted by professionals to be their go-to aerial mapping solution,” commented Gilles Labossière, CEO of senseFly. “What we see is that industrial users are increasingly understanding the efficiency benefits a fixed-wing solution can bring over other sUAS platforms, such as quadcopters; primarily, that a fixed-wing drone’s greater endurance enables operators to complete medium- and larger-sized projects faster than a rotary drone. This helps to reduce in-field labour costs at a project level, and it enables operators to complete, and bill, more projects each week.” 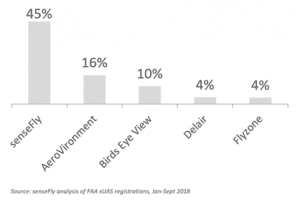 These US market share figures are reflected across the Atlantic in France, the only other country for which commercial drone figures are publicly available. According to the Dirección General de Aeronáutica Civil (DGAC)’s most recent listing of active commercial UAV operators (available here), senseFly professional drones account for over half of all commercial fixed-wing drone use in France, at 53%, a full 42% ahead of the next fixed-wing provider on the list.

To locate a senseFly distribution partner near you, visit senseFly’s Where to Buy page.

About senseFly
At senseFly we believe in using technology to make work safer and more efficient. Our proven drone solutions simplify the collection and analysis of geospatial data, allowing professionals in surveying, agriculture, engineering and humanitarian aid to make better decisions, faster. Founded in 2009, senseFly is the commercial drone subsidiary of Parrot Group. For more information, go to www.sensefly.com.