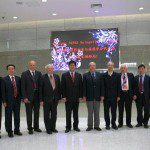 The Geospatial Information Research Center opened this week in Beijing via a partnership between the Chinese Academy of Surveying and Mapping and the U.K. University of Nottingham. The research center will focus on navigation, global positioning, photogrammetry...

Mipela GeoSolutions is opening a new office in Melbourne on Monday 9th January 2012. This is in line with one of the company’s “Twenty14 Strategic Plan” key objectives of expanding geographical presence. The Melbourne office has been opened to...