A map that uses data from Earth-observing satellites to calculate the risk of fire catching and spreading has been launched to help countries in Southeast Asia ward off damaging blazes. Read More at EandT 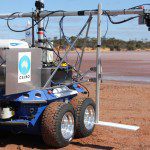 A prototype autonomous vehicle, or rover, developed by CSIRO is helping scientists improve the accuracy of Earth observation satellites that provide valuable data to our mining and agricultural industries. Just as the Mars Rover Curiosity is gathering...