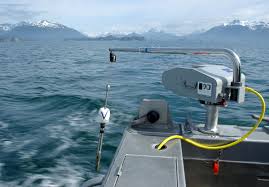 CARLSBAD, Calif. October 2, 2015 —Teledyne Oceanscience supplied world-leading geospatial company TerraSond Limited with rapidCAST, a new innovative automated underway profiling system. According to TerraSond, the product was used in a major hydrographic project completed for NOAA’s Office of Coast Survey  in the Bering Sea in northwestern Alaska for the purpose of nautical chart updating.

“The rapidCAST system contributed to the high production rate we experienced on this project, helping us to finish well ahead of schedule,” said Andrew Orthmann, TerraSond Limited’s charting program manager. “The project area was located in an exposed area of the Arctic with a limited ice-free season. It was therefore crucial that we finish the project before the fall storms intensified and the Arctic ice-pack moved back in, and the rapidCAST helped us do that.”

The rapidCAST system performed reliably, with no major issues encountered, and the following advantages were noted:

TerraSond used the rapidCAST system with a Valeport rapidSV sensor to collect sound speed profiles for correcting the bathymetric data. The  system was mobilized by TerraSond aboard the R/V Qualifier 105 (Q105), a 105’ research vessel which collected multibeam data 24/7.

Approximately 320 sound speed casts were conducted with the system over the course of the project, in depths from 5 to 40 meters. The interval  between casts varied from 30 minutes to 3 hours.

For a video of rapidCAST in action and to learn more about this innovative new profiling system, visit www.oceanscience.com/rapidcast.html.

TerraSond is a private US company that provides geospatial information in the oil and gas, pipeline, power, telecom, renewable energy, mining, shipping, dredging, construction, and engineering sectors, as well as  for US federal, state, local and foreign government agencies. TerraSond has offices in Alaska, Washington, and Texas as well as Mexico, Brazil,  and Equatorial Guinea.

A part of the Teledyne Marine family, Teledyne Oceanscience is a world leader in designing and manufacturing field data systems for hydrologists, hydrographers, and oceanographers. The company’s products include tethered, remotely-controlled and autonomous survey vessels and the revolutionary UnderwayCTDTM.  Teledyne Oceanscience has supplied the oceanographic community with  deployment platforms for environmental monitoring instrumentation for  more than a decade. Developing effective time-saving and data-optimizing equipment, and supporting customers in the field, are the cornerstones       of Teledyne Oceanscience’s mission. To learn more about Teledyne  Oceanscience and its suite of products, visit www.oceanscience.com.