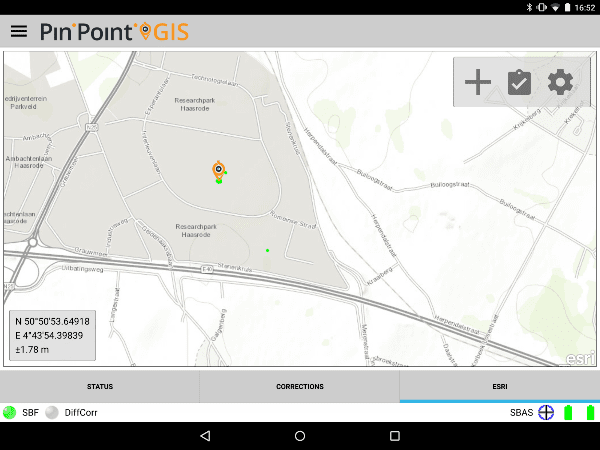 Leuven, Belgium, July 18, 2015— Septentrio, a leading designer and manufacturer of GNSS receiver is proud to announce a new software suite called PinPoint-GIS which makes GIS data collection and visualization straightforward. Septentrio’s PinPoint-GIS provides several methods of data collection, based on a standard web browser hosted on the Altus APS-NR2 and a mobile app integrated with Esri’s ArcGIS or other GIS mapping systems.

Any user of PinPoint-GIS benefits from bringing the data collection process into their familiar GIS environment. Data collected with Altus and Septentrio receivers is directly available in the user’s GIS application. This data is processed into the database without any intermediary steps, greatly reducing the time and complexity of the collection process for the user. This allows the user to focus on the project objectives by easily customizing and updating maps instead of losing time on the mechanics of data collection and transmission.

Altus APS-NR2 and GeoPod are well known for providing consistent and accurate data. Thanks to PinPoint-GIS, this data becomes seamlessly integrated with the GIS database. The data becomes easily accessible to the field worker though existing hardware such as commercial and ruggedized mobile devices, regardless of their operating system.

“By introducing PinPoint-GIS, Septentrio is committed to making accurate and reliable GIS collection as simple and cost effective as possible. Once installed Pinpoint GIS works without user involvement to place high quality positions into the users existing GIS data collection tools by using the three components of the software” stated Gustavo Lopez, PinPoint-GIS Product Manager. Lopez continued: “Thanks to PinPoint-GIS, Septentrio provides a seamless interface for capturing data in the field, customizing maps, access to data and user functionality. More field workers can get greater productivity from their existing GIS tools.”

Septentrio designs, manufactures and sells high-precision multi frequency multi constellation GPS/GNSS equipment which is used in demanding applications in a variety of industries such as marine, construction, agriculture, survey and mapping, GIS, UAVs as well as other industries. Septentrio receivers deliver consistently accurate GNSS positions scalable to cm-level, and perform solidly even under heavy scintillation or jamming. Septentrio receivers are available as OEM boards, housed receivers and smart antennas.

Septentrio offers in-depth application and integration support to make its customers win in their markets. Septentrio is headquartered in Leuven, Belgium and has offices in Torrance, CA and Hong Kong, and partners throughout the world.

To learn more about Septentrio and its products, visit www.septentrio.com