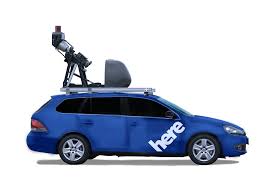 Espoo, Finland, Aug. 3, 2015—Nokia today announced an agreement to sell its HERE digital mapping and location services business to a consortium of leading automotive companies, comprising AUDI AG, BMW Group and Daimler AG (the “Consortium”). The transaction values HERE at an enterprise value of EUR 2.8 billion with a normalized level of working capital and is expected to close in the first quarter of 2016, subject to customary closing conditions and regulatory approvals. Upon closing, Nokia estimates that it will receive net proceeds of slightly above EUR 2.5 billion, as the purchaser would be compensated for certain defined liabilities of HERE currently expected to be slightly below EUR 300 million as part of the transaction. Nokia expects to book a gain on the sale and a related release of cumulative foreign exchange translation differences totaling approximately EUR 1 billion as a result of the transaction.

In April 2015, Nokia announced a review of strategic options for HERE in light of its proposed combination with Alcatel-Lucent. The announcement of this sale to the Consortium concludes that strategic review process.

Rajeev Suri, President and Chief Executive Officer of Nokia, said: “With this step we complete the latest stage of Nokia’s transformation. We integrated the former Nokia Siemens Networks, divested our Devices & Services business, and have now reached agreement on a transaction for HERE that we believe is the best path forward for our shareholders, as well as the customers and employees of HERE. Going forward, we will focus on our planned combination with Alcatel-Lucent. Once that is complete, Nokia will be a renewed company, with a world-leading network technology and services business, as well as the licensing and innovation engine of Nokia Technologies.”

HERE is developing a location cloud that harnesses the power of data generated by vehicles, devices and infrastructure to deliver real-time, predictive and personalized location services. In the automotive industry, where it serves most of the world’s leading automakers, its focus is on developing precise and accurate mapping as well as services that will enable an entirely new class of driver experiences, including highly automated driving. The company also serves the world’s leading enterprises and Internet players, including Microsoft, Samsung and SAP, and offers highly rated apps to consumers using Android, iOS and Windows Phone.

“I believe today’s announcement is a very good outcome for HERE, its customers and employees. The new ownership structure of HERE will allow us to accelerate our strategy, further scale our business and fulfill our intent to become the leading location cloud company across industries,” said HERE President Sean Fernback.

Upon closing of the HERE transaction, Nokia will consist of two businesses: Nokia Networks and Nokia Technologies. Nokia Networks will continue to be a leading provider of broadband infrastructure software and services. Nokia Technologies will continue to provide advanced technology development and licensing. Nokia’s proposed combination with Alcatel-Lucent is expected to close in the first half of 2016, subject to customary closing conditions and regulatory approvals, and will create an innovation leader in next generation technology and services for an IP connected world.

HERE, a Nokia company, is a leader in navigation, mapping and location experiences. We build high-definition (HD) maps and combine them with cloud technology to enable rich, real-time location experiences in a broad range of connected devices – from smartphones and tablets to wearables and vehicles. To learn more about today’s announcement, visit theHERE 360 blog.