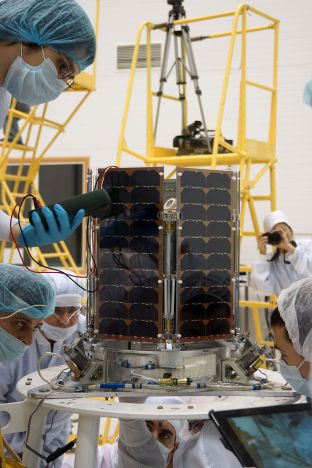 It is planned to receive the data from the microsatellite to a SCANEX ground network UniScanTM, with the data to be used in commercial, scientific, educational and environmental projects.

“It is an important event for us, — says Alexander Serkin, ISC Kosmotras CEO. — For 20 years we have been working with globally famous companies — spacecraft developers, the majority of them are private ones. And today we have an opportunity to participate in the implementation of a private space project in Russia. And we are certainly proud to be a part of this event”.

After its ascent to orbit, subsystems developed by the company will be tested. First signal from TabletSat-Aurora is already received. The spacecraft weight is 26 kg, with minimum designed life expectancy of 1 year. The spacecraft is equipped with a high accuracy tri-axial orientation and stabilization system and an optical camera for Earth imaging from space, with resolution of 15 m per pixel.

The satellite platform and the majority of systems and equipment were developed by the company, with financial support from the Skolkovo and ISC Kosmotras.

In 2012 SPUTNIX, a daughter company of the SCANEX, became a resident of Skolkovo and received a grant from the Skolkovo space cluster. It took 8 months to develop and prepare a microsatellite for the launch.

“In our plans — creation of a cluster of small spacecraft and ultrahigh detail imaging satellites”, — said Andrey Potapov, SPUTNIX CEO.

Sputnix is a Russian innovative company, developing and producing small satellites platforms and systems. Company is a Skolkovo resident and creator of the first Russian private satellite for Earth Observation.

Company core business activities are associated with implementation of the Dnepr Program – a peaceful use of the SS-18 ICBMs withdrawn from service. Since the inaugural Dnepr launch in April 1999, 20 commercial flights have been performed and the total number of payloads launched has amounted to 122. www.kosmotras.ru