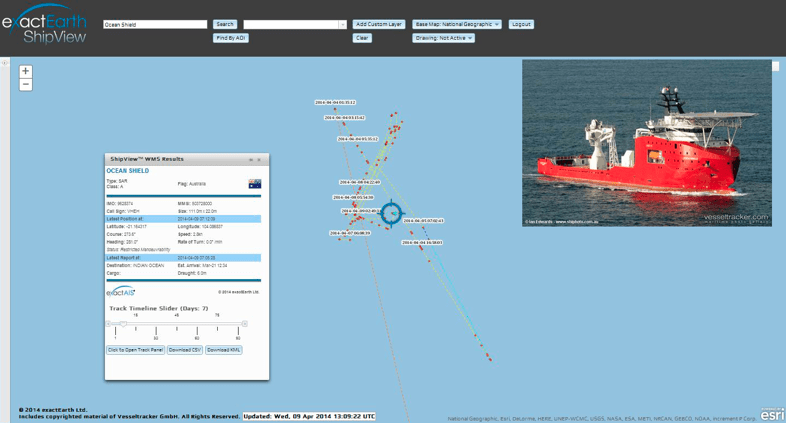 exactAIS tracking as the Ocean Shield searches the area for another signal potentially from Flight MH370.

The signals detected 1,645km northwest of Perth are the strongest indication yet that the plane crashed and is now lying at the bottom of the ocean in the area where the search is now focused. Still, Houston warned he could not yet conclude that searchers had pinpointed Flight MH370’s crash site.

Finding the black boxes quickly is a matter of urgency because their locator beacons have a battery life of only about a month, and Tuesday marked exactly one month since the plane vanished on March 8.

If the beacons blink off before the black boxes’ location can be determined, finding them in such deep water (about 4,500 metres) would be an immensely difficult, if not impossible, task.

To assist the Ocean Shield, the Australian Navy began using parachutes on Wednesday to drop a series of buoys in a pattern near where the signals were last heard. Each buoy will dangle an underwater listening device called a hydrophone about 300 metres below the surface. The hope is the buoys will help better pinpoint the location of the signals.

Picking up the sound again is crucial to narrowing the search area so a small, unmanned submarine can be deployed to create a sonar map of a potential debris field on the seafloor.

U.S, Navy Capt. Mark Matthews said the detections indicate the device emitting the pings is somewhere within about a 20km radius. Still, he said, that equates to a 1,300 square kilometre chunk of the ocean floor.

The search for debris on the ocean surface picked up intensity on Wednesday, with 15 planes and 14 ships scouring a 75,400 square kilometre area that extends from 2,250km northwest of Perth.