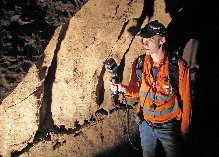 “It’s a fantastic research tool; the fact we can use the models in the lab where we have really good light and good conditions to work under. Whereas in the cave, because it’s in complete darkness, it’s really hard to do the research,” said archaeologist Dr Keryn Walshe from the SA Museum. Dr Walshe says she is keen to determine who made the markings; men, women or children. “It is really tempting; it’s really hard actually, not to touch the soft surface because it’s so inviting. It’s this beautiful pure white colour, like snow. It looks so lovely and soft you just want to touch it, but you mustn’t.”

The ZEB1 system includes a lightweight laser scanner mounted on a simple spring mechanism. As the operator moves through an environment the scanner loosely oscillates about the spring producing a rotation that converts 2D laser measurements into 3D fields of view. Its ability to self-localise makes ZEB1 ideally suited for use indoors, underground and in other covered environments, such as dense forest and urban canyons, where traditional solutions that utilise GPS don’t function well. The 3D survey of the caves, created using ZEB1, can be analysed in detail using CAD-type visualisation software. The data can also be used to create physical reconstructions of the caves using 3D printers.

The ZEB1 mobile mapping system was developed by CSIRO, Australia’s national science agency, and is licenced from GeoSLAM (a UK based start-up company). The competitively priced ZEB1, now exclusively available from 3D Laser Mapping, allows for fast data capture, without complex set up or the requirement for lengthy data processing and can be used by surveying novices, in areas without GPS coverage, capturing accurate 3D point clouds at speed.

Koonalda Cave is closed to the public and is accessible by permit only. A product video can be viewed at: http://www.youtube.com/watch?v=DUEAz_naHHg


CSIRO, the Commonwealth Scientific and Industrial Research Organisation, is Australia’s national science agency and one of the largest and most diverse research agencies in the world. CSIRO works with leading scientific organisations around the world, and is recognised internationally for the quality of its research. CSIRO’s research is performed by the 13 Divisions, which are the business units of CSIRO. CSIRO is one of the largest and most diverse scientific institutions in the world with more than 6500 staff located across 56 sites throughout Australia and overseas. For further information see www.csiro.au