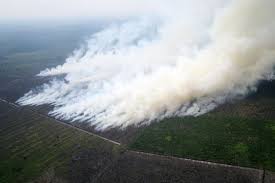 Indra Pelani was energetic and inquisitive. After planting the fields, he often roamed the village with his camera to record life in Tebo, a district in the resource-rich Indonesian province of Jambi. Sometimes he would capture clashes between the local farming community and the plantation company that acquired the farmers’ ancestral land in 2004.

“Indra was a fast learner and a very good investigator,” Abdoel Seberang, an activist from environmental NGO Walhi Jambi, told us as Indra’s mother Nurhayana walked away, weeping with grief. “Indra was not formally schooled but he learned how to use the GPS and read coordinates to help us with mapping,” Abdoel added.

Indra became a victim of his good work some 100 days ago. The 21-year-old was stopped, taunted and struck by seven plainclothes company guards on his way to a rice harvest festival, held within the concession of PT Wira Karya Sakti (WKS), a pulpwood supplier to plantation giant Asia Pulp & Paper (APP). His companion, Nick Karim from Walhi Jambi, fled to seek help. When he returned with more villagers, Indra was gone. The next day, Indra’s body was found in a swamp. It was covered with cuts and bruises, his mouth stuffed, his hand and feet bound. He left behind his widowed mother and a younger sister.

The guards have turned themselves in. Asia Paper & Pulp and Wira Karya Sakti were quick to suspend operations and offer compensation. A mass prayer ceremony for Indra was conducted on Tuesday, but there remains no closure for his family and friends. Members of Walhi Jambi and the Tebo Farmers’ Union believe the assault was triggered by an incriminating picture in Indra’s camera – one that allegedly shows a local officer’s involvement in a land grab. Investigations into Indra’s murder are ongoing.

The case has sparked international outrage. But Indra is not the only victim of such violence. In 2014 alone, at least 116 environmental and land defenders were killed worldwide, according to international non government organisation, Global Witness. Many more were intimidated, and more deaths have likely gone unreported. Nearly all the killings were triggered by disputes over ownership, control and use of land.

In Indonesia, land conflict is a longstanding and growing problem, along with deforestation and haze pollution. These are often by-products of rapid expansion of agriculture, forestry and mining, driven by the ever-soaring demand for commodities.

The uncertainty over who owns what is mainly due to the absence of a comprehensive and up-to-date reference map that could accurately account for all land use in the vast archipelago.

Up until late last year, different ministries and government agencies were using their own maps to make decisions on land use.

Information on the allocation of land-use permits is seldom shared across agencies, making it possible for multiple permits to be legally issued for the same area, creating multiple legal concession holders, upsetting local residents and fuelling conflicts that have sometimes turned deadly.

The lack of coordination between the central government and district governments is even more pronounced. The heads of district governments have enjoyed considerable autonomy in natural-resource management since the authoritarian rule of Suharto gave way to a decentralised power structure in the late 1990s. Some district heads have used the opportunity to maximise revenue by granting permits even within the boundaries of existing concessions, adding to the confusion. The ambiguity creates a convenient excuse for companies to blame one another or the local communities for any environmental violations. Consequently, people who live in the most resource-rich provinces often bear the brunt of the worst haze pollution and associated problems.

Recognising the need to tackle the land tenure chaos, the Indonesian government is implementing its One Map initiative, first conceived under former president Susilo Bambang Yudhoyono. In late 2014, Indonesia’s Geospatial Information Agency rolled out a standard land cover map after consolidating spatial data from 13 government agencies. This is a good start, but the country is still a long way from sorting out its many overlapping concession boundaries and competing land claims.

A practical step forward for the government is to deploy more resources to map the conflict-prone provinces. For example, World Resources Institute’s Indonesia Country Director (WRI) Nirarta “Koni” Samadhi suggests that mapping should begin in Riau, a province long dogged by severe bouts of Indonesia haze and a host of other issues, including land conflicts.

At the recently held Singapore Dialogue on Sustainable World Resources, a Singapore Institute of International Affairs’ (SIIA) flagship forum, Koni appealed to all major companies to release their concession maps. Beyond that, the government must also put boots on the ground to drive the mapping of smallholders’ concessions as well as indigenous people and local community’s customary land. “This is how we can have a clear and accountable land ownership for every part of the country, and every party involved,” he said.

Following the 2013 haze crisis, Singapore tried rallying Asean leaders to agree to the sharing of official land use and concession maps under the joint Haze Monitoring System. There was initial resistance from countries including Indonesia and Malaysia, which cited domestic laws that bar the disclosure of national assets including forest resources even in the light of the Indonesia haze.

Asean leaders eventually agreed to the sharing of official maps at the government-to-government level, on a case-by-case basis. But many have since realised the bigger question lies in whether the haze-prone countries have an accurate and comprehensive map to begin with.

One Map is a huge undertaking and is certainly labour-intensive and time-consuming. But the benefits of acting on it with a greater sense of urgency are obvious in dealing with Indonesia haze issues.

First, accurate concession maps can be fed to satellite monitoring tools such as the WRI’s Global Forest Watch-Fire and the SIIA’s Haze Tracker. This would give more teeth to domestic laws against illegal logging and environmental violations, as well as to Singapore’s Transboundary Haze Pollution Act.

Second, One Map is also instrumental to the work of other Indonesian government agencies, such as the National Agency for Disaster Management and the new Investment Coordinating Board, a one-stop licence service centre for foreign investors. More importantly, only with One Map can the longstanding conflicts over land ownership between communities, smallholders and large concession holders be better managed, and tragedies like Indra’s death avoided in the future.