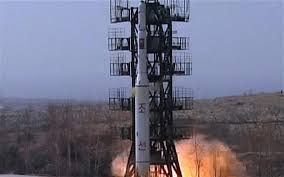 The country launched an Earth observation satellite in 2012, and that’s their only satelite to date. The ongoing development of Earth observation capacity has a high profile with a visit from leader Kim Jong Un to a new satellite control center that was show on North Korean television.

The rocket launch may be times for the country’s 70th anniversary this October. Tensions are high given the country’s claims that they have built a nuclear warhead small enough to fit on top of a rocket.