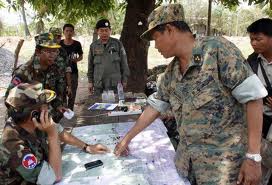 Thailand had earlier sent 100 troops to the area after Cambodian authorities began a road building effort in the area. The troops prevented the construction effort, and after talks both countries agreed to the surveying effort.

The two countries are now in talks to cooperate, including cooperative military patrols of the border region.