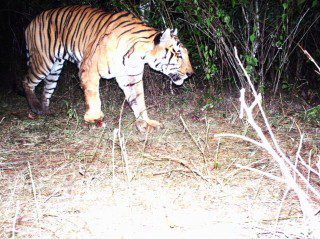 In recent tiger-conflict cases involving both a human fatality and the predation of livestock, both occurring near two of India’s national parks, WCS scientists helped to identify problem tigers using stripe pattern-matching software and additional information to make the connections. Both tigers have been captured and relocated to a nearby zoo.

Reducing human-wildlife conflict while promoting human welfare and conservation in important wildlife habitats is one of many topics under discussion of the World Parks Congress, a once-in-a-decade event focusing on the management and expansion of the world’s protected area networks and the wildlife they contain. The congress, which took place in Sydney, Australia concluded today.

“The vast majority of tigers generally avoid humans and focus only on natural prey species,” said Dr. Ullas Karanth, WCS’s Director for Science-Asia and lead author on the paper. “Using scientific methods to locate individuals involved in conflict with humans and livestock helps us to mitigate threats to people and prevent the capture of the wrong tigers, especially wherever tigers may venture beyond protected area borders.”

While tigers struggle to survive in other landscapes across their range through Asia, the big cats in the Malenad Tiger Landscape of southwest India have thrived, becoming one of the largest tiger populations in the world with an estimated 400 animals.

Part of this conservation success has been due to a WCS research program focused on the identification of individual tigers. The system uses unique stripe patterns to identify and track individual animals, and software programs have greatly improved the speed and accuracy of the process. Since the initiation of the research protocol, more than 750 tigers have been identified from six protected areas in the Malanad Tiger Landscape in the Western Ghats across India. The system also enables researchers to keep track of other data such as home range locations, age and ex of individual animals, activity patterns. Over the longer term it even enables estimation of survival and recruitment rates and changes in numbers, all of which can be used to inform management decisions on wild tigers.

The tiger database has become a key factor in finding and capturing problem tigers. One of the recently captured animals was involved in the loss of human life near Bandipur National Park in late December of 2013. Scientists managed to get pictures of the animal from camera traps set up near the area of conflict and discovered a match with an animal photographed over a 5-year period and probably past its prime. Old tigers unable to catch natural prey animals can sometimes resort to hunting livestock, bringing them in conflict with people.

Another tiger, involved in the killing of cattle in a village next to Nagarahole National Park, was by contrast a 2-3 year old youngster some 35 kilometers from locations in which it was previously photographed. Scientists concluded this young tiger was likely searching for a territory, beyond protected areas.

Once ranging across Asia from Turkey to Indonesia, the tiger has been decimated by a combination of habitat destruction, overhunting of prey animal, poaching for the illegal trade and retaliatory killing by humans. The total wild population has been reduced in numbers from perhaps 100,000 at the turn of the 20th Century to a current estimate of fewer than 3,500 animals remaining in only 6 percent of the species’ historic range.

Tiger conservation advances in India are made possible through the generous support of the Liz Claiborne and Art Ortenberg Foundation.

WCS works to save tiger populations and their remaining habitat in nine range countries across Asia.