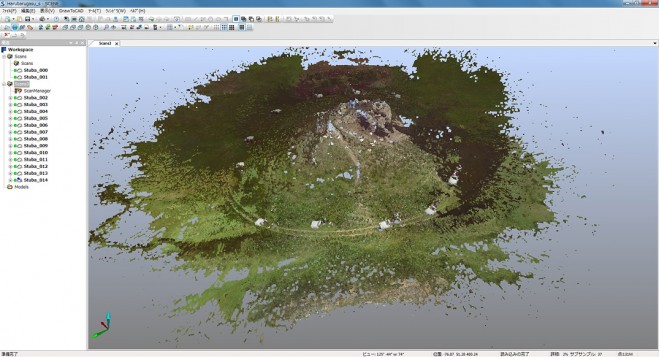 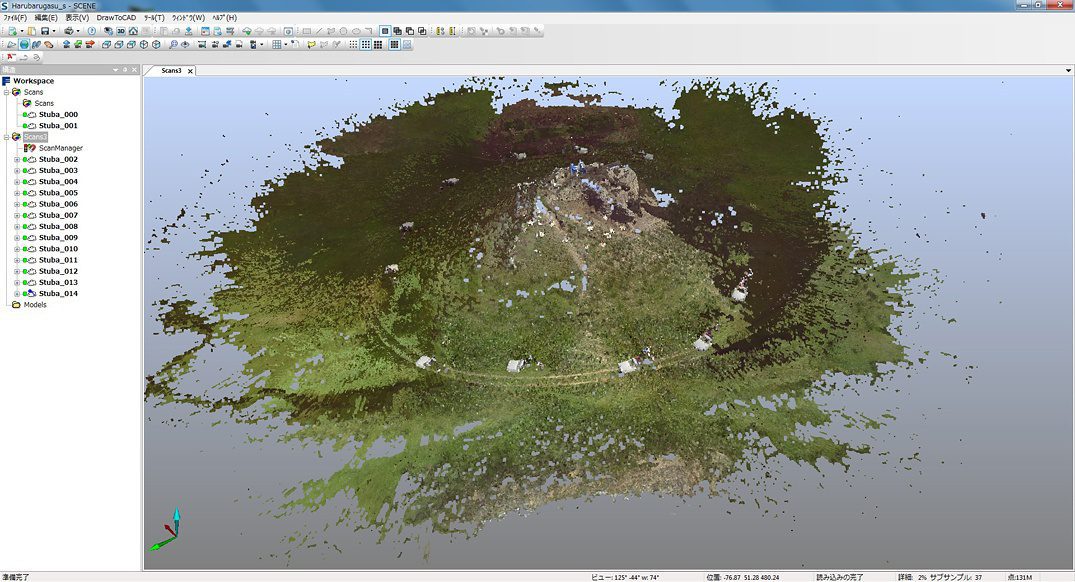 This partnership between Mongolia and Japan started in 2009, when Nara University started surveying and researching archaeological ruins in Mongolia as a joint research project, under a collaboration agreement signed with the Institute of Archaeology at the Mongolian Academy of Sciences. The first three phases of the joint project were completed over a period of three years ending in 2011, with the fourth phase starting in 2012. A full survey of the ruins has also been started and is expected to continue through 2014.

One of the aims of the survey was to build a digital archive of the historical ruins. Up until the third phase of the survey, the research team solely utilized a short-range 3D measurement device. However, the range was relatively narrow and made it difficult for researchers to capture a wide range of data. At that time, the Research Representative of this survey, Associate Professor Tetsuo Shoji, Ph.D., Faculty of Sociology of Nara University, got to know about and see scanned data from the FARO® Laser Scanner Focus3D during information exchange sessions that he held with other universities.

Associate Professor Shoji assessed that with an integrated color camera, compass, and the ability to perform helical scans, the Focus3D instrument may be useful to the research project, so he subsequently introduced it for the survey. Focus3D is a 3D laser scanner that can obtain a vast amount of information with a measurement speed of approximately 976,000 points per second. Weighing just 5kg, the small and highly portable device was quickly introduced to the research team and deployed to the survey site.

The on-site surveys in 2012 were conducted by a team of 15 members, from 4 to 12 August, at three ancient ruin sites of Khar Bukh, Baibalyk, and Khar Bargas. The first site, Khar Bukh, contained ruins of the Khitan Period from the 9th to the 11th century AD. As Khar Bukh was rebuilt in the 16th century by reusing the stone structures and walls of the city, these ruins are considered relatively well preserved, in comparison with the ruins at the other two sites.

The next site is Baibalyk. Although the place has been listed as a World Heritage Site as the “Orhon Valley Cultural Landscape”, only some parts of the rammed-earth construction remain, while the rest have turned into vast grasslands that witness the occasional nomad group, herding sheep across the ruins leisurely.

The last site is Khar Bargas. Located about 40km to the north-west of Karakorum, these ruins, like Baibalyk, are also listed as a world heritage site, and similarly only some parts of the rammed-earth architecture and pagodas remain.

Associate Professor Shoji pointed out the problems commonly found in all three sites. “These ruins are all crumbling and I believe most will probably not be around in 10 years’ time.”

For example, as wasps build their nests in the city walls of Baibalyk, the structures will gradually lose strength and start to collapse section by section. In addition, the land is frequently visited by nomads and sheep that make their way to the top of the ruins, accelerating the wear and tear of the site.

“What we need to do now is to faithfully retain as much of it as possible using current technology,” Associate Professor Shoji commented.

Speeding up the Scanning Process

At the three archaeological sites, the survey team used the Focus3D to scan shapes of the ruins to create a digital archive. The researchers had only nine days to complete the project on-site, so it was important for them to work quickly to gather all the scans on time. Associate Professor Shoji said, “In surveying the extensive ruins, the time taken for scanning was shortened considerably thanks to the Focus3D.”

Future use of 3D data

With the ease-of-use and collection of 3D data, a world of possibilities has opened up for researchers to employ laser scanning in the field of archaeology. Another consideration is pricing. Digital archiving with laser scanners were too expensive for small project use when they first originated about 20 years ago, but the significant drop in the price of laser scanners over the past five years has made 3D scanning a viable and preferred option for data collection purposes in the field of archaeology.

“In future, we have to consider how to use and apply the digital data collected,” said Associate Professor Shoji. “For example, I believe that recreating ruin structures using computer graphics, or comparing the digital data with the original structure of the ruins will be an epitome of the use of 3D data in future.”

In addition, Associate Professor Shoji is interested to install the Focus3D on a moving vehicle to perform helical scans and to digitize the surface images of the ruins, and preparations for continued research at the ancient city are already in progress.

Associate Professor Shoji concluded, “Our collaborative agreement with the Mongolian Academy of Sciences will last until 2022, and till then, we hope to recreate in as much detail as possible the images of the ancient city lying underneath the expansive grasslands.”

Located on a quiet, high ground that is surrounded by temples, shrines and many historical ruins, Nara University was founded in 1969. It is a university that specializes in rare historical studies and boasts a high level of professionalism with students from all over Japan. In addition, as the first university in Japan with a Department of study of Cultural Properties, there are many renowned professors in the field of history and archaeology at the University.

Furthermore, the “Faculty of Sociology” established in 2010 is a new department that combines social sciences and informatics, where one can learn how to perform and analyze social studies using information media. This survey is co-conducted by the Department of study of Cultural Properties and Faculty of Sociology, leveraging their respective expertise. The cultural relics department performs the archaeological survey of the ruins while the social studies department uses information technology to create a digital archive of the ruins.