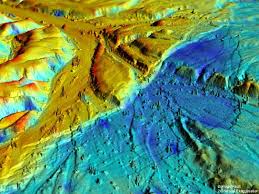 “Light detection and ranging (LiDAR) presents a new approach to build detailed topographic maps effectively,” they report. They add that these high-precision three-dimensional models can be used to illustrate not only land surface changes following past quakes, but also features of past ruptures that could point to the possibility of future temblors.

Experts at the State Key Laboratory of Earthquake Dynamics and at the National Earthquake Infrastructure Service in Beijing, working with a colleague at the United States Geological Survey (USGS) in Pasadena, California, mounted a Leica ALS-60 LiDAR system aboard a Chinese Yun Five aircraft and then began scanning the Haiyuan fault zone in a series of flights over the course of a week. The fault zone is similar to the San Andreas fault in California, which has similarly been scanned and studied as a comparison.

“During the past century,” they explain in a new study, “the Haiyuan fault zone produced two great earthquakes: the M 8.5 Haiyuan earthquake in 1920, along the eastern Haiyuan fault, and the M 8