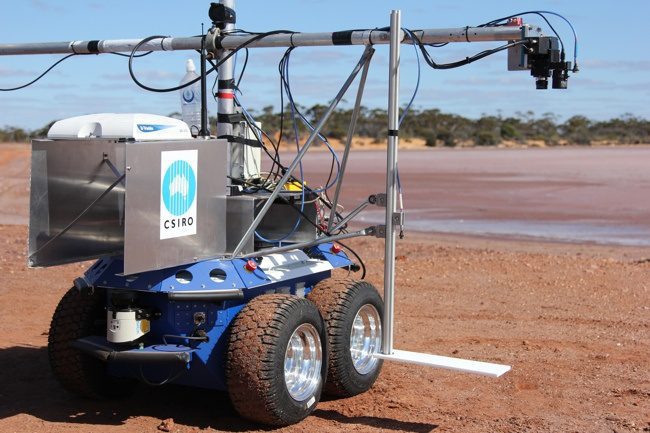 A prototype autonomous vehicle, or rover, developed by CSIRO is helping scientists improve the accuracy of Earth observation satellites that provide valuable data to our mining and agricultural industries. Just as the Mars Rover Curiosity is gathering information about our neighbouring planet, CSIRO’s affectionately nicknamed ‘Outback Rover’ is helping to calibrate satellites that provide clues to Earth’s soil condition, mineralogy and vegetation.

Accompanied by researchers from Japan, China, Israel and France, CSIRO scientists recently took the rover prototype on a mission to Lake Lefroy – a huge salt lake in remote Western Australia – to see if they can automate the satellite calibration process.

Professor Arnold Dekker, Director of Earth Observation and Informatics at CSIRO, explains that this is where information gathered by satellites is matched against measurements taken on-ground and compared for accuracy.

“Satellite data is used for resource exploration, environmental monitoring and agricultural management such as soil mapping. So it must be regularly cross-checked to ensure that observations are accurate.

“This process is called vicarious calibration and is undertaken by ground crews who walk in grids or transects, taking measurements with hand-held devices known as spectrometers as satellites travel overhead,” he says.

Owing to its sheer size, Australia is one of the world’s biggest consumers of Earth observation data however it doesn’t own any remote sensing satellites.

“With its bright and uniform surface, Lake Lefroy is the perfect location to carry this out. However its downside is that it is a long way from any urban centres, meaning it can be very time consuming and take scientists away from their other research for days on end.

According to Dr Alberto Elfes, CSIRO’s science leader for robotics, this could be about to change. He hopes the rover will be able to collect calibration data autonomously and send it wirelessly back to researchers.

“The ultimate goal is to have the rover operate alone, with scientists from over the world able to retrieve data from it or control it remotely in real-time,” he says. “For example, scientists could tell the robot to turn left or right, follow a sensor signature that is interesting or do a more detailed analysis in a particular area.”

“Once we know we have acquired accurate data from satellites, it can be used for a range of applications. It can show us where to explore for mineral deposits and even allow us to monitor soils, which can provide great benefit to our farmers.”

As well as ensuring the accuracy of the current suite of space travelling cameras and sensors, the information collected by the rover could also be used for the next-generation of satellites that will use high-resolution ‘hyperspectral’ images.

“These satellites will be able to collect more detailed data, including information about dry and woody plant materials and specific mineralogical data that cannot be measured with current operational satellites,” Professor Dekker says.

Owing to its sheer size, Australia is one of the world’s biggest consumers of Earth observation data however it doesn’t own any remote sensing satellites.

“This why international collaborations like this are vitally important, and have led to major achievements such as our world-first continental scale mineral maps, derived from the Japanese ASTER sensor on board the NASA TERRA satellite.”

The CSIRO team is now analysing the data the ‘Outback Rover’ collected on its recent mission. The hope is that it will improve the process of satellite calibration, leading to more efficient, productive and profitable mining and agricultural industries.