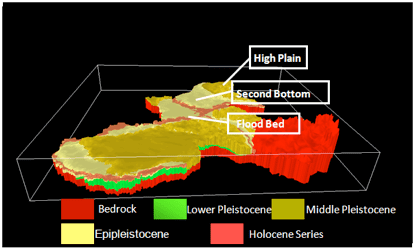 MapGIS 3D Geological Mapping tool adopts the following multiple methods to achieve 3D geo-modeling functions:
For simple stratigraphy region, the tool uses multi-source data such as borehole, section and contour to construct all stratum surfaces on the basis of stratigraphic sequence, and then builds the whole area stratum entity model by overlapping the order.

For complex stratigraphy, the tool adopts “subarea-splice” modeling. First the region is spliced according to the cross section to generate multiple grids, then the boundary in each grid is enclosed to build stratum surface, and to generate geological blocks separately by using topological relation. Finally, all blocks are combined together to generate the regional 3D model.

For some specific regions, the tool adopts a man-machine interactive modeling method in each independent small unit of the fine model, which integrates the geological knowledge of professionals with the modeling process. The final geological models of all units are combined as a whole.

After the geological model is built, analysis can be conducted. Analysis of the model has been helpful for both urban geology and digital mining projects. This tool achieves a multi-veiwpoint and real-time dynamic analysis of complex models. With the 3D entity modeling and simulation of evolution, the tool has greatly improved the geological modeling process.

The simplified exploration of geological models provides researchers and technicians a greater opportunity to explore and add knowledge about the world.

Authors: Fang Da and Chen Xiaojin are with Zondy Cyber Consultants, and can be contacted via e-mail: ib at mapgis.com.