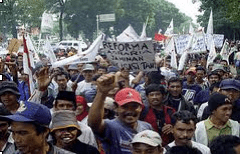 Fundamental to the challenges facing the reform of the Indonesian land sector is that it lacks a comprehensive land law. All land in Indonesia falls into one of two categories: (i) forest estate (kawasan hutan); and (ii) non-forest estate (Areal Pengunan Lain, APL). As such, land is administered under a dual system through two different government agencies, the Ministry of Forestry (MoFor) and the National Land Agency (Badan Pertanahan Nasional, BPN) responsible for forestry and non-forestry lands, respectively. It is further complicated by indeterminate entitlements to land; lack of recognition of customary (adat) rights to land; lack of processes allowing free, prior, and informed consent; excessive application of the State’s power of eminent domain; and a policy for the allocation of land concessions that ignores or overrides the rights and interests of other rights holders. Add to this, government control over land, State land (hak menguasi negara). Land administration and land management are also built upon a range of complexities established in the colonial past. Taken together, the dual system, along with colonial legacies, have generated numerous challenges to good land governance in the country including the rights of individuals, communities, and the sustainable management of natural resources. Confronted with serious challenges, the government is currently working to clear hurdles with regard to existing land-related regulations that date back to the 1800s.

Political Economy
At the International Conference on Regulatory Reform of Indonesian Land Laws for People’s Welfare, held in Jakarta on December 11, 2012, high-level government and civil society speakers identified lack of political will at the highest levels as the key obstacle to land reform in Indonesia. Initiatives to transform property rights seriously challenge existing structures that sustain deforestation. This means that any reform must challenge the power of the MoFor and local administration over forest lands. At stake with any such reform is the ongoing accumulation of vast profits from economic activities generated from unregulated and unsustainable forestry. Accordingly, any effort to implement good governance over forest land faces numerous challenges. In case of non-forest land areas, complex and overlaps laws, decrees and regulations prevent resolution of tenure claims and strengthening land administration. Further, lack of clarity on forest and non-forest land areas, due to absence of reliable maps and data, prevent progress in building tenure security.
In order to appreciate the challenges facing land-sector reforms in the country, it is also necessary to understand the political economy of land in Indonesia.  Real prospects for reform have emerged only since the late 1990s. Indonesia’s growing political stability has created a window of opportunity for the implementation of important reforms, including land reforms. The government recently made a strategic commitment to developing stronger, more robust policies and programs for addressing land-sector problems. The reforms are taking place through a dynamic series of top-down high-level initiatives and seem to be followed by a series of complementary bottom-up responses from civil society. Taken together, these are leading to changes in the formal and informal balance of power between central and regional government authorities such as in determining the allocation of land within provincial spatial plans.  A pilot assessment of land governance, using the World Bank’s land Governance Assessment Framework (LGAF) was undertaken in 2009.  It is anticipated that a more comprehensive assessment will commence later in 2013.  In addition, it is anticipated that there will be support for dissemination of the United Nations Voluntary Guidelines for Land Tenure.

Key Government Land Reforms:  Top-Down Initiatives
The government has initiated several measures at national and local levels to focus on and resolve overlaps and simplify complexities of the legal instruments, confirm tenure security, and strengthen institutional mechanisms for land governance. These initiatives include:
• In early 2010, a unified Presidential Task Force on Reduced Emissions from Deforestation and Forest Degradation (REDD+) was created. The Task Force is working on REDD+ related tasks to develop a set of strategies and plans for implementation. The REDD+ Task Force has 16 working groups to address specific issues. This Task Force has drafted a national strategy to unify all initiatives under REDD+, and set-up criteria and guidelines for funding mechanisms. The Task Force is also working on legal and enforcement issues. Central Kalimantan has been selected as the pilot province for these efforts. These efforts run parallel, and are complimented by current trends towards decentralization of government functions.
• In May 2011, the national government announced a 2-year moratorium on the award of new land use licenses on primary natural forests and peat land areas. The Presidential Task Force is monitoring the enforcement of this moratorium. The government has acknowledged several issues go well beyond REDD+ and forest carbon/climate mitigation issues.
• The House of Representatives approved a Land Acquisition and Compensation Law in December 2011, which covers land acquisition for public projects such as railways, ports, roads and dams. This law is seen as an instrument to clear existing blocks to executing infrastructure projects. This, and other new regulations have met with expected controversy and opinions are polarized on investor versus community/individual rights.
• The passage of the Geospatial Law in 2011, has endorsed Indonesia’s National Spatial Data Infrastructure (NSDI), and mandated that Badan Informasi Geospasial (BIG, National Mapping Agency) is the lead agency.  BIG will provide much needed leadership to unify information on land and natural resources in the country. The OneMap policy recognizes that Indonesia needs a standard reference set of basic mapping.  It also recognizes that this must also include cadastral information – knowing where each land parcel is, its boundaries, who owns it, and the rights attached to the land.  This is fundamental to good land governance and government decision making on land and natural resources. There are also other efforts to merge innovations and different technologies through a national data warehouse.
• Following the decision of the Constitutional Court in early 2012 on forest land areas, MoFor has revitalized the Tenure Working Group on Forest Lands in which representatives from civil society organizations (CSOs) also take part. This dialogue process was complemented by the CSOs drafting a Roadmap for Tenure Reforms (of forest land areas).
Taken together, the top-down reforms are leading to changes to the formal and informal balance of power between central and regional government authorities in determining the allocation of land to forestry versus no-forestry purposes within provincial spatial plans.
Civil Society Advocacy and Bottom-Up Engagements

On the bottom-up side of the reforms, the following initiates are important to note:
• The judicial review petitions filed by the civil society groups on the authority and management of forest land areas and pending petition on Land Acquisition and Compensation Law, 2011 show that the support of local authorities and civil society groups for the big bang reforms is conditional.
•  The OneMap approach is designed to generate bottom-up support through community mapping to help people negotiate rights among themselves. BIG and the REDD+ Task Force are also taking steps to combine community mapping with satellite imagery and other geospatial information in a geographic information system under OneMap that can assist  in recording and enforcing the agreements reached through community negotiation.
•  Together with OneMap, the government has introduced participatory land use planning in the forest areas. This is an initiative that MoFor has been keen to scale up from previous pilot efforts. This brings in both bottom up support/work and also endorsement from the top.
• Government is gradually opening up to endorsing some new tenure norms (e.g., community titling for Indigenous Peoples’ based on community maps produced in the Ancestral Domain areas and pertinent registry). Government has also agreed to accept community maps produced for the Ancestral Domain areas where Indigenous Peoples’ reside.
• The Memorandum of Understanding signed between Aliansi Masyarakat Adat Nusantara (AMAN, Indigenous Peoples’ Alliance of the Archipelago) and BPN in September 2011, there is an additional effort on the part of civil society organizations. This additional effort concerns how to carry out reforms within the agrarian land sector (that includes forest land areas outside official governmental forest estate) such that the rights of Indigenous Peoples are recognized. As a result of this initiative, the land tenure reforms’ appear as more comprehensive and respond to key issues confronted by the Indigenous Peoples.
• The NGOs working as part of the MoFor’s Tenure Working Group have prepared a road-map to achieve tenurial justice for forest land areas and is working with the ministry in implementing the Forest Tenure Improvement Program.
• Through on-going dialogue, a concerted effort is being put in place strengthened tenure security over both Forestry and Non-Forestry Land. Not only will this significantly improve the lives of millions living in the official “forest estate” but given Indonesia’s focal status in REDD+ agenda, these reforms have placed the potential to transform rural people’s well being, forest condition as well as greenhouse gas emissions. In effect, the tenure working group provides the bottom-up approach to complement the top-down initiatives like REDD+ Task Force.

Final Remarks
Understanding the underlying dynamics of the political economy of land that challenge the implementation of good land governance in Indonesia is fundamental to the achievement of land sector reform and providing donor support. Changes within the Indonesian government and changing relationships between the government, civil society, and the private sector are opening up new spaces for negotiation and also new areas of conflict. The highly political nature of Agrarian Reforms, especially given statements by the President himself, has seen the subject return to the center stage of public debate. While the Indonesian government and political leaders struggle to reform land laws, local communities and local governments seem to have taken the lead in forging new relationships and patterns in land management creating new challenges for land governance.
The current World Bank’s stock-taking of the Indonesian land sector, which will be delivered by September 2013, is expected to identify priorities for donor support to land-sector reform. Early indications suggest that support may be required in the areas of: (i) the proposed new Land Law and implementing regulations; (ii) Land Reform Plus (Agrarian Reform); (iii) procedures for recognition of participatory community land mapping; to be undertaken by civil society in support of the land rights of indigenous communities, especially in forest lands; (iv) enhancing National Spatial Data Infrastructure (NSDI) along with OneMap; (v) land governance, including the application of the Land Governance Assessment Framework (LGAF) and awareness raising of the Voluntary Guidelines for Land Governance; and (vi)  a comprehensive study on the political economy of land.

About the Authors:
Dr. Keith Clifford Bell, is a Professional Engineer and Licensed Surveyor, and is currently the World Bank’s Senior Land Policy Specialist for the East Asia and Pacific Region, based in Washington, D.C. Shivakumar M. Srinivas is a consultant for the World Bank and the United Nations Food and Agricultural Organization (FAO) working in the East Asia Region, currently based in Jakarta, Indonesia.