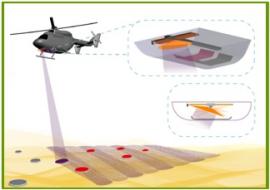 the United Nations mine action programs continue to support efforts to eradicate the land of mines. However, despite the efforts there were at least 4,286 people killed or injured by mines between May 2011 and May 2012. Given the ongoing destruction, efforts are underway to redouble efforts of eradication.

Unmanned aerial vehicles have been outfitted with radiometry technology that can pick out the tiny electromagnetic reflections emitted by buried objects from as high as 200 feet in the air. This technology can be used in landmine detection and with a GPS scan-to-map system, a detailed map can be created that then can be acted upon to eliminate the mines. This system and method is more effective and less dangerous than the systematic probing of minefields that is the standard practice.