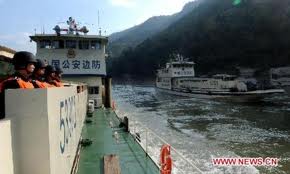 The gang of Naw Kham had terrorized the Mekong River area, operating out of Laos, Thailand and Myanmar. More than 16 individuals were killed or injured in 2008, with the 13 Chinese sailors killed aboard cargo ships in Oct. 2011. With growing evience, and increasing lawlessness, Chinese authorieties moved in.

News reports indicate that China’s Beidou GNSS system was instrumental in tracking and communicating the fugitve’s location. The satellite navigation system allowed the task force to communicate outside the foreign country’s mobile network that was compromised by locals aligned with the gang.

Chinese authorities also discussed the use of unmanned aerial vehicles to target and dispose of the fugutive once he was cornered in Laos. While officials rejected that option, due to the mandate to capture the gang alive, it does indicate the level of sophistication that China’s own UAV capabilties have progressed to the point of armed action.

The cooperative effort between China, Laos, Myanmar, and Thailand was led by Chinese authorities, but not its military. The operation remained a law enforcement cooperation, enforcing the law in an area that is notorious for its smugglers, miiitias, and pirates on speedboats.