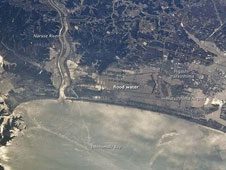 The Environmental Research and Visualization System (ISERVE) imaging instrument is part of a larger SERVIR mission, a join venture between NASA and USAID. The SERVIR provides space-based remotely sensed information and analysis to developing nations for decision making on natural disasters, climate change and environmental threats. The instrument was designed and built at NASA’s Marshall Space Flight Center in Alabama, and will be installed in the Window Observational Research Facility inside the ISS Destiny laboratory.

SERVIR has active hubs in Kenya at the Regional Center for Mapping of Resources for Development and in Nepal at the International Centre for Integrated Mountain Development and plans to expand the network in the next year. The hubs consist of teams of scientific experts who develop satellite and other geospatial data into useful information for governments and non-governmental organizations in the host nations.

The International Space Station Agricultural Camera (ISSAC) operates in survey mode, collecting imagery whenever the ISS is over the states of ND, SD, MN, MT, WY, ID during daylight hours. With the demise of Landsat 5 in October 2011, and with the replacement Landsat spacecraft not scheduled for launch until December 2012, ISSAC will serve as a partial gap-filler for Landsat, though only for the specified region. The three spectral bands of ISSAC – green, red, and near infrared – are comparable in bandpass frequencies to bands 2, 3, and 4, respectively, of Landsat.

ISSAC has been built and will be operated primarily by students and faculty at the University of North Dakota. The camera will take frequent images in support of farmers, ranchers, foresters, natural resource managers, and tribal officials of the region to help improve their environmental stewardship of the land.

The Japan Aerospace Exploration Agency supply ship carries 4.6 tons of cargo including food and clothing and other research gear.