May 31st, 2012
Monitoring the Christchurch Earthquake Damage is Ongoing 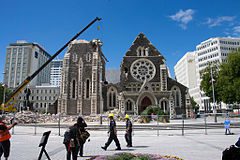 The rebuilding effort from the first quake was well underway when the second earthquake struck, just a few kilometers from the central city, killing over 180 people and creating utter devastation in the central city and eastern suburbs. Access to the damaged areas is still restricted to a significant portion of the inner city.

While creating a reasoned and appropriate response to a disaster of this scope is extremely difficult, the Paterson Pitts Group survey team were able to deploy CHC GNSS equipment on two key projects to go a small way toward helping Christchurch rebuild. Because of the substantial effects the earthquake had on the river banks of the Avon and Heathcote rivers, with damage to bridges and surrounding land, it was essential to ascertain the effects the quake had caused in the bed of the river.

For this project, a CHC base and rover were used. The rover was also connected at times to a third party Internet Base Station and horizontal corrections were supplied via the cellular telephone network. Vertical positioning was supplied by an echo-sounder, with the information collated in real time on a tablet PC. This “hydrographic” survey differed from most, as large parts of it were conducted in an urban or industrial setting rather than offshore or in a lake. The entire estuary was “sounded” as well, with the journey becoming a little more exciting when surveying near the outlet, where ocean swells made their presence felt to those inside the small boat. But the crew were confident of the robustness of the equipment, having already rescued it from the surf when things didn’t quite go to plan in an earlier project.

To complete the project, the CHC equipment was used for mapping the banks and shoreline, before all the new data was matched with existing post earthquake LIDAR data and aerial photography. This created an overall “picture” of the river system post-earthquake and also allowed a comparison between pre and post earthquake data. This means that the changes in the heights and positions of the flood banks relative to mean sea level and the hydraulic capacity of the river system can be studied. Emergency work has been undertaken to raise the banks to protect the city from storm events and high tides.

Several thousand houses near the rivers were damaged by the earthquake due to liquefaction and are likely to never be rebuilt. When undertaking decisions of this magnitude, it is essential to have data of a high quality. The high degree of accuracy, low cost, robust nature and excellent support made CHC the ideal equipment provider for this project. CHC International intensified their support to existing and potential customers following the earthquakes, culminating in a visit to Christchurch and Dunedin to offer local surveyors the chance to purchase GNSS Survey equipment and to install an Internet Base Station in Christchurch for Philip Conway Surveyor Ltd.

Philip Conway, Paterson Pitts Group and CHC have worked together to provide high quality deliverables on three large projects in the last 9 months. Phillip has also been involved in survey work for the City Council and for small scale residential developments. The City Council surveyors have also made extensive use of Philip’s CHC base station.

Amongst the damaged infrastructure in Christchurch, the damage to the sewer system has probably been the most topical, with thousands of Portaloo’s dotting the urban landscape and 10,000 chemical toilets being flown into the city from China and distributed by the army. It has been necessary to intercept broken sewers and pump untreated sewerage into the rivers, as there is simply no alternative because of the vastness of the damage. Many man-hole chambers “floated” during the quake, or the changing ground levels meant that the pipelines no longer flow down-hill between each inspection point.

To identify the problem areas, a citywide survey is being undertaken which involves measuring the elevation of the sewer “cover” and a visual inspection of the chamber as well as the measurement of the pipes entering the chamber. Several survey firms have been contracted to work on this project, and it presented another chance to deploy the CHC equipment. Some of the work has been undertaken under frosty or wet conditions. One memorable occasion involved surveying an arterial road in the middle of the night using expensive traffic control. In this environment, there is no margin for technical problems or delays due to complexities. Despite the temperature being sub-zero throughout, and our rover having a hard landing when the truck it was leaning against drove away unexpectedly, everything went more smoothly than we anticipated. The light weight of the rover and controller was a real positive attribute; and the touch-screen layout of the GETAC controller running Carlson software made the operation straightforward, even in the cold and dark with fatigue beginning to bite.

With aftershocks buffeting our temporary base in Christchurch, each one feeling like a bulldozer is being driven at the side of the house, I suspect the work of CHC equipment in the Christchurch rebuild is far from over.

Andrew Robinson is a technician with Paterson Pitts Group and can be reached via e-mail at andrew.robinson at ppgroup.co.nz.