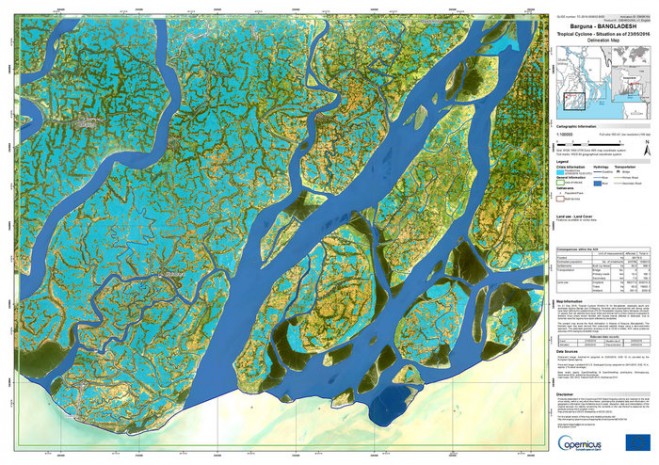 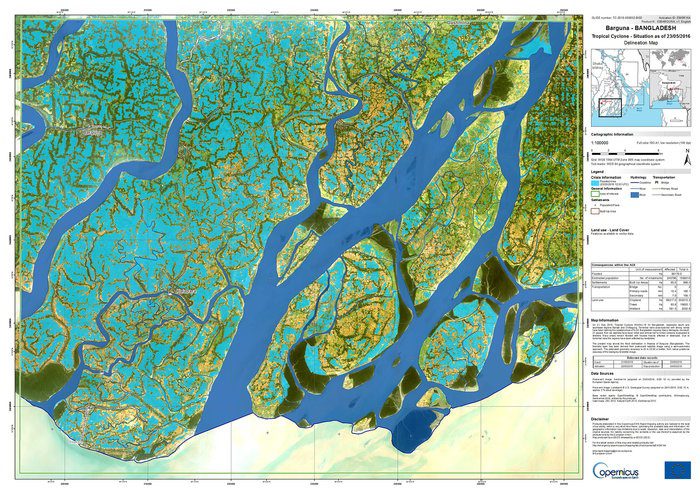 Cyclone Roanu has claimed over 100 lives in Sri Lanka and Bangladesh, and has left tens of thousands in need of aid. Officials are looking to the sky for information on flooded areas to analyse the cyclone’s aftermath and support emergency response activities.

On Monday, the Sentinel-1A satellite captured about 80% of the country of Bangladesh during a single pass. The images were quickly delivered to the Copernicus Emergency Management Service (EMS) to create flood maps, revealing over 170 000 hectares to be inundated.

The response to the request for data was quick, as was the generation of flood information by EMS: less than 30 hours from activation to the delivery of the first flood map.

A ‘rush mode’ to process and make Sentinel-1 data available for EMS has been set up in order to reduce the response time as much as possible.

The Sentinel-1 mission for Europe’s Copernicus programme is revolutionising the use of satellites in managing risk assessment and emergency response with the provision of large-scale radar data in a systematic fashion.

Sentinel-1A can map a 250 km-wide strip while achieving a ground resolution of 20 m per pixel.

The radar on Sentinel-1 is able to ‘see’ through clouds, rain and in darkness, making it particularly useful for monitoring floods, usually connected to bad weather conditions. Images acquired before and after a flood offer immediate information on the extent of inundation and help to assess property and environmental damage.

The International Charter for Space and Major Disasters also requested data for flood maps in western Sri Lanka – hit by the precursor of the cyclone on 16 May. The Charter was triggered by the Disaster Management Centre of Sri Lanka on 17 May, channelled through the Asian Disaster Reduction Centre.

For the impact on Sri Lanka, Sentinel-1 operators planned specifically to grab images on Sunday, 22 May, and the maps were generated by Monday.

In response to Cyclone Roanu, additional Sentinel-1A radar scans are planned for the coming days to help the relief activities further.

Once the twin satellite – Sentinel-1B – is operational, the mission’s potential revisit time will be cut in half, further improving the response time to disasters.

Sentinel-1B was launched on 25 April and is being commissioned – engineers are checking to make sure the satellite and its instrument are ready before the data can be distributed.