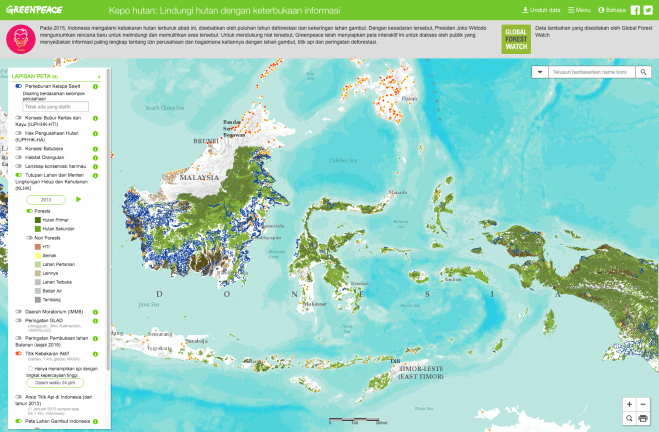 Greenpeace has launched an interactive map of Indonesia to track forest fires and deforestation. The Kepo Hutan (Curious About Forests) mapping platform was launched on March 15.

The interactive map supports President Joko Widodo’s plans to resolve deforestation issues and ties into the One Map Policy.

The system will let users see whether the fire is on peatland, in primary or secondary forest, in tiger or orangutan habitat, in a palm oil, pulpwood, logging or coal-mining concession.

“The president’s bold plan deserves our support, which is why Greenpeace is launching the “Kepo Hutan” interactive map. Kepo Hutan allows the public to see the most detailed-ever company information, showing the borders of concessions and who owns them, and how it relates to peatlands, fire hotspots and deforestation alerts.

“The transparency promised by President Jokowi, which includes the One Map agenda, is still an urgent and unmet need. Fires are returning in East Kalimantan and also in Riau, where the provincial government has declared a state of emergency. Greenpeace is making this map data available today both to spur progress on the stalled One Map, and to allow the public to prevent another crisis by monitoring fires in forests and peatlands.”

“This new map platform will shed much-needed light on forest management in Indonesia, which remains far from fully transparent. Transparency is the hallmark of accountable government, and can help eradicate corruption. By ensuring everyone can see where rights over forests have been handed out, and to whom, these maps will help reduce state losses through corruption in granting concessions, and improve compliance with land management rules.”

This interactive map, produced using open source technology provided by Global Forest Watch, makes available for the first time a comprehensive collection of data on palm oil, pulpwood, selective logging and coal mining. [2] In order to produce the platform, Greenpeace compiled concession data from multiple sources, including paper maps and PDFs, digitising it into scalable digital maps for use in Geographic Information Systems (shapefile format). These shapefiles are highly suitable for analysis in combination with data the platform provides on fire hotspots, types of forest cover, peat depth, deforestation, and orangutan and tiger habitat.

“We have done our best to gather in one place every map available. But public information on who controls our forests could and should be even better. The government should comply with our formal requests to publish accurate, up-to-date official concession maps, in shapefile format, to save this case from having to proceed to an appeal in the Public Information Commission,” said Teguh.

“The public has the right to comprehensive geospatial information in the most useful format — shapefiles — to allow continuous analysis and monitoring. No-one should have to jump through legal hoops and wait months or years to gain access to scraps of vital data. The government standard should be: all of the data, all of the time, available to all,” said Bambang Widjojanto [3] .

Greenpeace’s Kepo Hutan platform also enables the public to download the shapefiles which underpin the new map platform, enabling community organisations and researchers to carry out their own analyses. The data available via the Kepo Hutan platform includes game-changing GLAD deforestation alerts for Kalimantan, which show where tree cover appears to have been lost over areas as small as just two basketball courts, a resolution an order of magnitude higher than previous systems.