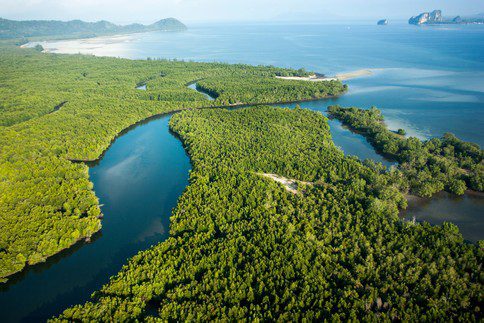 Southeast Asia has the greatest diversity of mangrove species in the world, and mangrove forests provide multiple ecosystem services upon which millions of people depend on. Mangroves enhance fisheries by providing habitat for young fishes and offer coastal protection against storms and floods. They also store substantially higher densities of carbon, as compared to most other ecosystems globally, thus playing an important role in soaking up carbon dioxide emissions and mitigating climate change.

Despite their benefits, mangrove forests in Southeast Asia have experienced extensive deforestation over the last few decades due to global demand for commodities. This phenomenon is likely to persist, given the continued increase in population and global affluence.

The researchers discovered that the mangrove deforestation rates in Southeast Asia were lower than previously thought. They also identified the rapid expansion of rice agriculture in Myanmar, and sustained conversion of mangroves to oil palm plantations in Malaysia and Indonesia, as increasing and under-recognised threats to the mangrove ecosystems.

The findings were published in the journal, Proceedings of the National Academy of Sciences of the United States of America, in December 2015.

“This is the first study to systematically quantify the conversion of mangroves to different land use types in Southeast Asia and identify the key drivers of mangrove deforestation over the last decade. While the available data potentially show encouraging signs of a slowdown in mangrove deforestation, it is important to note that mangrove loss in Southeast Asia still remains substantial. This not only results in negative impacts on the mangrove diversity but also undermines the ecosystem services that mangrove forests provide, such as carbon storage,” said Asst Prof Friess.

The team found that around two percent of Southeast Asia’s mangroves, amounting to over 100,000 hectares, were deforested from 2000 to 2012. While existing studies have primarily held the expansion of aquaculture responsible for mangrove deforestation in the region, the researchers found that the conversion of mangroves for alternative land uses to provide other commodities, including rice agriculture and oil palm plantations, also had an important role to play.

The motivating factors and target commodity differs by country and were influenced by the respective national economic policies. For instance, in Myanmar, rice production is considered critical for national food security, while palm oil production in Indonesia, Malaysia, and Thailand is promoted to enhance the economy and improve national energy security.

Continued agricultural expansion for rice in Myanmar and conversion of mangroves into oil palm plantations in Malaysia and Indonesia, may spell danger for the mangrove ecosystems in Southeast Asia in the near future.

This study has shown that rice expansion in Myanmar has accounted for more than a fifth of the total mangrove change in Southeast Asia over the study period, and these trends are likely to continue with the rapid economic transformation in the country if environmental safeguards are not put in place.

Currently, the development of oil palm plantations is already a major driver of terrestrial forest and peat swamp deforestation in Malaysia and Indonesia, contributing to regional issues such as haze. With palm oil production in Indonesia expected to increase steadily over the next few years, especially into frontier areas like Papua, Indonesia’s largest and easternmost province, this is also likely to pose severe threats to the mangroves forests there.

“Our study provides detailed information for evidence-based conservation of mangrove forests. Future research and policy interventions, at the national and subnational level, must consider the diversity of drivers of mangrove deforestation,” said Dr. Richards.